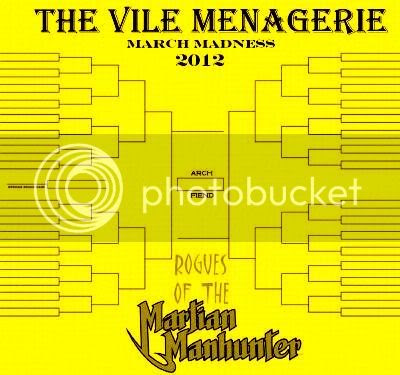 The Golden Hell was awash with blazes, and Ma'alefa'ak was pleased with the chaos...

Asmodel lay in a heap, having proven that an angel can bleed under the punishment of the interplanetary ultra-beast Doomsday. Antares had similarly descended from the stars, only to be brought low by Brimstone. Having conquered heaven, Doomsday set his sights on hell...

Nonplussed, Mongul projected a Cube-Trap around TOR, whose massive metal frame could not evade in time. The construct was sent far out into the ocean and released, to trouble no more. Meanwhile, the Pyre burned bright, but was overwhelmed and snuffed out by The Swarm. The alien scavengers pressed on toward the beach, as Mongul grimaced and girded himself...

Effigy's charred husk fell to the side of the volcano and rolled half a kilometer, bits of the villain flying off as it went. Far away, having failed to overwhelm through raw power, the Hyperclan had lifted Darkseid off the beach and gambled on tossing him down the fiery pit of the very same volcano. It was an ill-advised gambit, as the flames diminished their power, allowing the Lord of Apokolips to easily detect and pick off the disguised White Martians. Those left collapsed in the presence of Fernus, still hungry for death after his appetizer. Apokolips was ready to collide with Mars once more...

The Scary Monsters slashed at their squirming foes, but lacked the time and vessels to overcome
The Bloodworms of Mars before Fernus' nova blast immolated the lot. Far from immune themselves, the Bloodworms made their way toward the cool glittering rock along an inactive volcano. In a crevice, B'rett had used the reduced visibility to turn the tables on Kanto. The master assassin of the New Gods employed stealth and strategy, but a simple drop and roll saw him take the business end of a ray blast. Stunned, Kanto's superior skill could not be brought to bear against the xanthic bandit's raw power. However, just as B'rett had overcome one threat, the throng of Bloodworms posed another...

Korge had simply picked up Rott and devoured him, then awoke from his brief sojourn through another plane with the slightest touch of heartburn. Meanwhile, Lobo had just finished pounding Inflict into the very ground. One look across the battlefield confirmed that the Main Man and the Last Angry God were of a kind-- the fighting kind...

Golden Hell Round Two
Korge vs. Lobo
B'rett vs. The Bloodworms of Mars
Darkseid vs. Fernus the Burning Martian
Doomsday vs. Brimstone
Mongul vs. The Swarm
Posted by Diabolu Frank at 1:21 AM

Lobo vs Korge: The main man don't care about your deus ex!

Darkseid vs Fernus: This is a close one; I'll go with Fernus, since he ruined the JLA's day way worse than the Hyperclan, and Darkseid has fallen to agressive brute force before from Doomsday.

Doomsday vs Brimstone is a close one as well, with two of my favorite cool looking punching bags from the post crisis DCU. I'll go for Brimstone just by dumb luck. Tosses him into orbit or something.

Mongul vs the Swarm is some quality goods, and we'll say Mongul is enough of a badass to pull out the win, but he'll be in rough shape for the next round.

Sooner or later, probably later, and with great bloodshed, Lobo would figure Korge out.

I want to read the story of B'rett vs. the Bloodworms. That would be a cool 8-pager or one-off issue.

I tend to forget how powerful Fernus was before he got punked and forgotten. Based on the New 52, Darkseid is a brute himself, with far less potency.

Brimstone has become the colossus with an off-switch, and even with Doomsday having so lost his groove over the years, it's still his match.