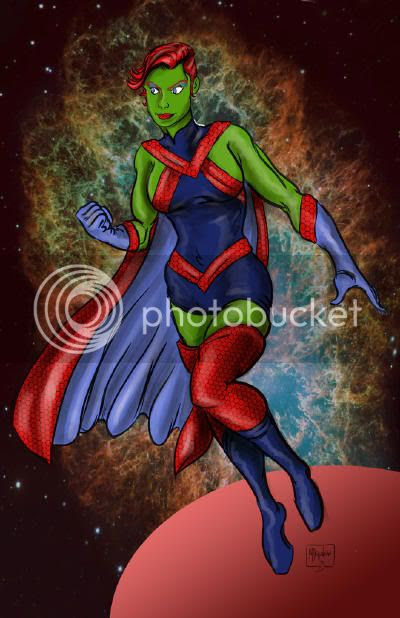 This one puts a bit more "Mrs." in Miss Martian...

This was originally for Comic Vine.
People seemed to give the rough so I just had to finish it.

It's based on the Martian Manhunter redesign I created a while ago. It works well for a grown up version of the current character.

Updated with a slightly less manish face and brighter colors.

Aguilera also played with three alternate designs. One was so radical, it fit the "Lizard-Beth Salamander" take I had in mind for the character during the McKeever days, before the Young Justice cartoon solidified her characterization as manga-sweet. There's a gladiator and Legion of Super-Heroes take too, which you can check out here!
Posted by Diabolu Frank at 2:44 AM

Please let me say that you have a great Martian Manhunter site Frank. A blogging buddy of mine, Shag, told me about it, and I have to say that I like it so much, that I was wondering if you would be interested in doing an interview with my site - http://www.comicbookandmoviereviews.com/

Follow me if you wish, you may get a few more followers in turn. Also, when you have the time, please check out my latest Stormwatch post - http://www.comicbookandmoviereviews.com/2012/03/stormwatch-7.html

Sorry for contacting you in this manner, but I could not find an email address or twitter account.