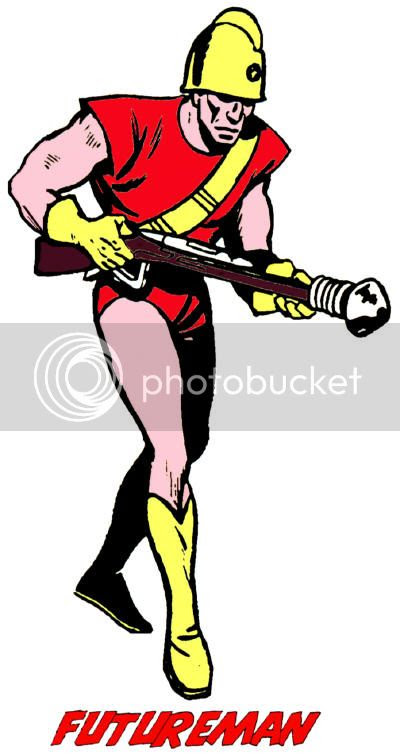 History:
In the year 2062, the being called "Futureman" was part of an unnamed law enforcement organization in pursuit of the Martian criminal B'enn B'urnzz. When B'urnzz happened to discover a new time machine while being pursued, he escaped to the preset year of 1962. "Futureman" was assigned to follow B'urnzz back through time, where he ended up in Middletown, U.S.A. The officer mistook a contemporary lawful Martian hero, J'onn J'onzz, for the similar looking B'urnzz. The Martian Manhunter defended himself against the man he dubbed "Futureman" as an advanced weapon designed for use specifically against denizens of the red planet put J'onzz through his paces. However, J'onzz eventually overcame Futureman and destroyed his weapon.

Just then, B'enn B'urnzz drove by in a car driven by some human gangsters who had befriended him as an agent of crime. Realizing his mistake, Futureman explained his mission to the Martian Manhunter, who assisted him in apprehending B'urnzz. Futureman then took his prisoner in a time machine back to 2062, where they had weapons to contain B'urnzz.

Powers & Weapons:
Futureman has not demonstrated any superhuman abilities, but he carries a special Anti-Martian Multi-Weapon. The device can redirect a gust of Martian lung power back toward the source, at an amplitude potentially much greater than originally projected. The weapon can vaporize an automobile with one blast, and can neutralize Martian immateriality, trapping them in solid objects while passing through. However, the rifle cannot stand up to Martian strength, as it was busted in two before any other abilities could be displayed, if any.

Quote: "Great Thunderbolts! What have I done? I-- I've been pursuing the wrong Martian... You are not B'enn B'urnzz!"

Created by Jack Miller & Joe Certa
Posted by Diabolu Frank at 1:35 AM