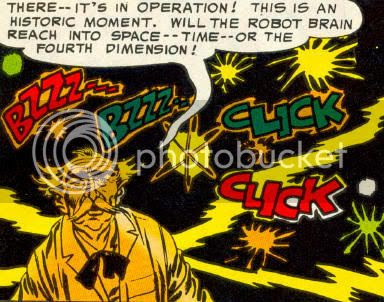 J'Onn J'Onzz's has a shaky history with supporting casts. The only two reoccurring characters to turn up in the early Manhunter from Mars strips were Professor Mark Erdel, who died in the first story and had his passing revisited with every origin recap, and Lieutenant Saunders, who was in charge of detectives on the Middletown Police Department. Saunders was soon replaced by Captain Harding, who served mostly to sit at his desk and provide exposition to John Jones at the start of his cases. From there were a bunch of "one appearance wonders," whom Scipio was kind enough to catalog in "Support Your Local Martian!" A few years in, a rival/love interest was introduced in the form of Policewoman Diane Meade, but she only appeared irregularly in a handful of Detective Comics strips over the course of its nine year run. Toward the end of that period, an other-dimensional pet/sidekick named Zook began joining J'onn J'onzz's adventures on a monthly basis, continuing into the majority of the Manhunter strip's House of Mystery entries. Once that ended in 1968, not a single member of the strip's supporting players would make another appearance for at least thirty years. 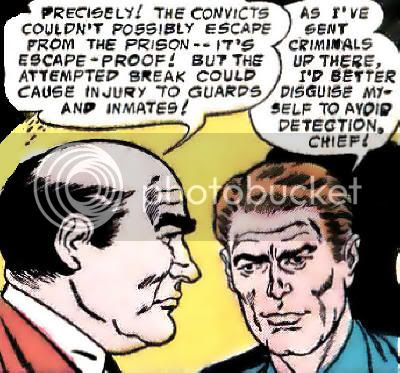 Beginning in the 1970s, the only support the Martian Manhunter received was in the form of fellow super-heroes and whatever normal characters also played into his various team books. Since J'Onn J'Onzz is such a workaholic and so rarely has his own title anyway, it makes sense that he spends most of his time with other super-heroes. I realize supporting casts have always been a comic book staple, but so too has the general apathy among fans and public alike regarding those types. For every Alfred Pennyworth or Mary Jane Watson, there are dozens of examples of Dulla McLovintrest, Guy Bestpal, Dr. Arther Tayfigure, and the rest. Rather than surround John Jones with expendable, forgettable cop buddies, why not get the exact same mileage with far greater levels of interest and resonance out of middling-to-obscure super-heroes? 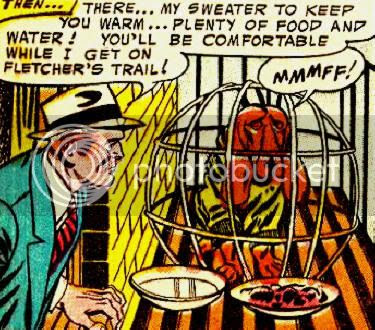 That seemed to be Scipio's logic, as his original vision of a Martian Manhunter series was something of a clearing house for maintaining old trademarks. Are You Sleeping, Brother J'onn? saddled J'Onzz with a supporting cast consisting of some of the least viable old DC properties imaginable. Besides looking to revive moribund franchises through association, Scipio also thought this would play off his theory of DC's Dynastic Centerpiece Model, which assumes that "a hero is not a single character but the centerpiece of his/her own array of good and evil forces... a constellation of characters is clustered around the central figure, which helps make him/her seem even more important...You may not always like how such a pattern's being used, but, like it or not, characters who lack the pattern have trouble standing on their own." From the Marvel Family to the Superman Family to the Batman Family, on down to Spider-Man and Wolverine, all the big guns got some. Mars wants some too! Let's see who fits into the Dynastic Centerpiece Model of Ma'aleca'andra...

Junior Counterpart: Jemm, Son of Saturn
Since Morrison connected the character to Mars in "Rock of Ages," and especially with Ostrander's follow-up in J'Onn's own title of Saturnians being clones of Martians, this was an early lock. Jemm was originally the "Son of Mars," and his entire supporting cast was based on Bronze Age Manhunter characters (including J'onn himself, replaced by Jogarr.)

Female Version: Miss Martian
She's got a bigger role in Young Justice than J'Onn ever did on Justice League Unlimited, and could end up being the tail that wags the dog.

Kid Sidekick:Gypsy
This might seem a curious choice with M'gann around, but you must remember that Miss Martian has operated independently of the Manhunter for most of her career. The connection is there, but the relationship isn't. Meanwhile, Cindy has been in J'Onn's life since she was fifteen and he didn't remember the deaths of his family. Not only is Gypsy the best possible surrogate daughter, but her willfulness and sarcasm serve as a great compliment to J'Onn's sullenness, reserve, and his own sardonic wit. 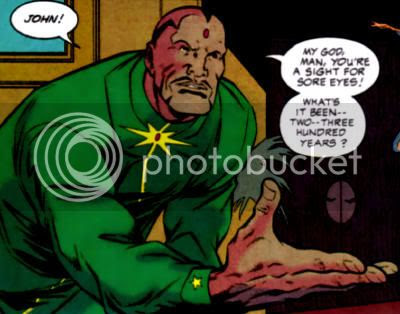 Black Sheep: Glenn Gammeron
What J'Onn does for love and altruism, Gammeron does for money and thrills. Glenn knew J'Onn before Mars died, and has been a thorn in his side for centuries since. This bounty hunting frienemy contrasts nicely against the Alien Atlas, and would double the acidic comments with Gypsy around. 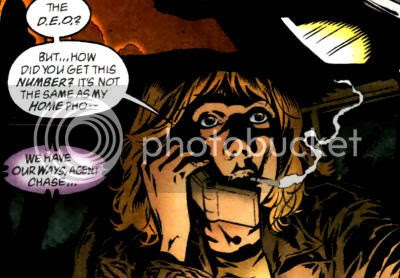 Civilian Companion: Cameron Chase
Damned if this DC thing isn't vindicating many of Ostrander's choices, but linking his run to D.C. Johnson's late, lamented series was a great idea. Chase has the government connections and cynicism J'Onn lacks, and her serving under Mister Bones brings her loyalties into question in interesting ways.

Elder Statesman: King Faraday
Darwyn Cooke's notion of connecting J'Onn & King grew to be among his favorite New Frontier relationships. Mine too. 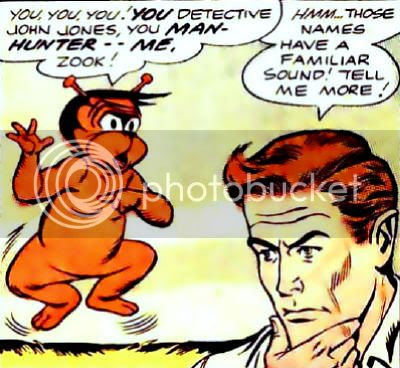 Animal Companion: Zook
Junior counterpart, kid sidekick... you just knew Zook would get in here, as well. I'm still not comfortable referring to Zook as a sentient "pet," but that was how the character was usually described.

Authority Figure: H'ronmeer
Don't get much more authoritative than your own personal Jesus.

Contextualizing City: None. I don't know when it was decided John Jones was a detective in Middleton, but his generic beat was almost never identified in the Silver Age. After he quit the force, whatever city he happened to be in was also rarely named, and pretty near never the same. Marco Xavier was all over Eurasia. There's just no good reason to pin J'Onn down to one burg, unless maybe Haven: The Broken City is still around somewhere. I do think J'Onn should have a cool base, whether it be a new Z'onn Z'orr, a repurposed Satellite/Watchtower, or what have you.

Posted by Diabolu Frank at 1:19 AM

This is all dead on. And I've been saying for years that Ostrander's choices when it came to the broad strokes were dead on. It was mainly the execution that leaves on wanting. That, and some of J'onn's personality traits; Too often in that run he rings a few cents from true.

As far as the city, all that you say is true. I liked him being set up in a few places, particularly in a Tokyo corporation.

I like this list and it is true that J'Onn should have a group of people centered around him. You could probably also add some characters in Stormwatch to the line up, as Jenny Quantum in some recent issues seemed to be J'Onn's kid partner in solving some problems.

Will, of all the things I had in mind for Martian Manhunter intermingling with the Wildstorm Universe, playing nursemaid to Jenny Quantum was not one of them. Still, Midnighter thoroughly abdicated any fatherly persuasions he might have had in the old continuity, so I suppose Jenny needs a protector with a better track record of mentoring young heroines (repeatedly leaving Gypsy to her probable demise notwithstanding.)

I may have mentioned this before, but some alternates include...

I just went with a combination of personal preferences and a desire to enlarge J'Onn's world beyond Middletown (sympatico with MC.)

I think that Midnighter is much creepier in this incarnation and that Jenny Quantum came out as much more mature than her one-time father figure. I imagine that she did NOT tell the other members of Stormwatch what happened as I suspect it would have been an expulsion for Midnighter at the least. (If not seeing what happens when Midnighter has to fight the Engineer, Jack Hawksmoor, Jenny and J'Onn at the same time. Somehow, I don't think Apollo, who we know killed some child pornographers, would be very happy with him either.) Let's hope that Jenny is very inventive in her punishment for Midnighter, who seems to be vying for biggest jerk who plays a hero. (Impotence might be better than turning him into a cockroach.)