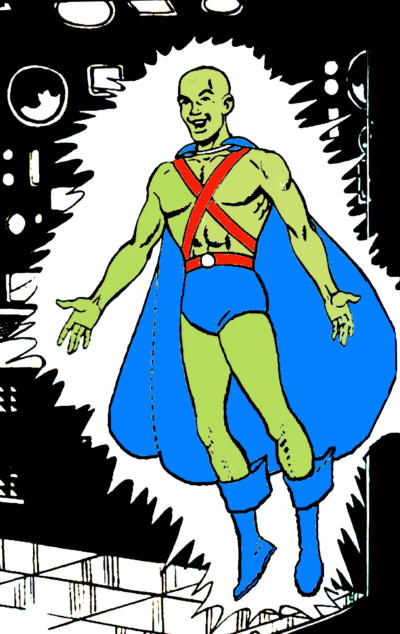 History:
T'omm J'onzz was just a boy when his older brother J'onn disappeared while away from home, performing an experiment with dangerous cosmic energy on their native Mars.  Years later, J'onn managed to repair elements of the robot brain that had inadvertently teleported him to the planet Earth, but an accident caused him to draw T'omm away from Mars instead of J'onn towards it. T'omm was shocked but ecstatic to be reunited with the brother that he admired so much, and after being caught up on J'onn's otherworldly adventures, pleaded to be allowed to stay on Earth. Failing to sway with words, T'omm stole a part from the robot brain, seemingly stranding him on Earth.

When J'onn was called away by a crime in progress, T'omm ended up helping to conceal his brother's dual identity as Middletown Police Detective John Jones by appearing to be the Martian Manhunter at a point when Chief Harding believed that he had deduced the alien hero's alter ego. Later, J'onn explained to T'omm the emotional strain likely felt by their parents over losing both their sons, and T'omm revealed his sabotage. The robot brain was only wired for one more trip to Mars, so T'omm returned home with his brother's promise to rejoin his family as soon as he could.

Powers:
While it is probable that T'omm J'onzz would possess some if not all of the powers of his brother, the Manhunter from Mars, his only superhuman feat on record involved leaping prowess.

Weaknesses:
Although not depicted in his published appearances, T'omm J'onzz likely is crippled in the presence of fire, as are most Martians.

Distinguishing Features:
While resembling his brother J'onn, T'omm J'onzz was an adolescent with a slimmer build, and his youthful face was much more humanoid in appearance.

Quote: "Well, even if my appearance was accidental, I'm happy! I've always wanted to be with you-- wherever you went!"

Created by Jack Miller and Joe Certa
Posted by Diabolu Frank at 1:10 AM

I suspect that T'omm and the Silver Age Mars is no longer part of the continuity. Still, it points out an important element of the Martian Manhunter -- family has been part of J'Onn's identity. Having lost his family as an adult and his entire world, J'Onn's pain may be greater than that of similar heroes like Superman. At his heart, Superman probably thinks of himself as a farmboy from Kansas. As much as J'Onn believes in and loves humanity, he realizes that he will never truly think of himself as one of us.

All true. Martian Manhunter took that sense of being the "Last Son" from Weisinger Superman, an era that creators have been putting distance from since Julie Schwartz took over as editor in the '60s. After Donner, Byrne and Smallville, I doubt the Man of Steel could ever rekindle that particular flavor of pathos. Combined with J'Onn being truly of Mars, complete with wife and child, the inheritance of planetary tragedy suits J'Onzz much better.