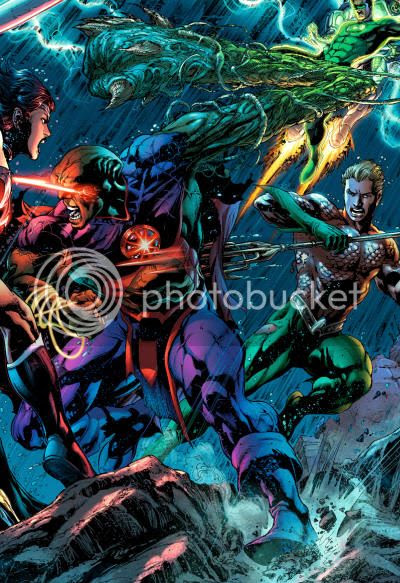 Green Arrow Oliver Queen wanted so badly to join the Justice League that he kept crashing their crime scenes and battles. Over forty years ago, Ollie got a new personality through aping Hawkeye, but he's never leaned on it this hard. Anyway, the team kept giving him the brush-off, and their government liaison Steve Trevor finally killed the issue by offering the Emerald Archer a role in another, secret team. Also, Steve was on Team 7, which is kind of cool. I can only name Deathblow, Grifter, Backlash and Lynch, so if they have to squeeze off somebody from Wetworks to make room, that's fine by me. Were there even actually seven of them? Whatever.

Wait, what does all this have to do with a Martian Manhunter blog? Well see, the League had refused all comers in the previous five years following the formation of the 7-nÜp squad of Superman, Batman, Wonder Woman, Flash, Green Lantern, Aquaman and Cyborg. That is, except one. "We all know what happened when we let someone else onto this satellite and into the Justice League. It ended very badly."

Cue a two page spread of the Manhunter from Mars single-handedly battling the entire team. The Dark Knight checked in on a downed Scarlet Speedster. The Amazing Amazon dodged Laser Vision that struck the Man of Steel, as the Alien Atlas tugged an arm bound by the Lasso of Truth. The King of the Seven Seas jabbed his trident at an immaterial wraith's back, while the deformed arm of the Martian Marvel batted the Emerald Gladiator into Cyborg. For those who've long awaited J'Onn J'Onzz betraying and battling the JLA, Merry Christmas.

"The Martian Manhunter's long gone."
"He still knows everything about us."
"More than we know about each other."
"Do we know where he disappeared to?"
"As long as it's far away from here it doesn't matter."

The Sleuth from Outer Space appeared to listen in on these thoughts as he stood on a desert plateau, staring into the starry night sky. "They're not prepared."

"Team-Up: Green Arrow" was by Geoff Johns, Carlos D'Anda, Ivan Reis and Joe Prado. The book only came out yesterday, and I usually wait a month or more as a sort of ethical embargo on synopsizing an issue. However, I found sneaking Martian Manhunter onto three pages of a four dollar comic such a douchey move, I'll forget that this round. This issue took a pretty big dump on JLA: Year One, one of my favorite Manhunter stories, but I expect it will end up with J'Onzz similarly vindicated in the long haul. "Trinity War" anyone? I also enjoyed J'Onn kicking butt under the pen of Reis & Prado, and was oddly touched by those final panels that recalled early Joe Certa.
Posted by Diabolu Frank at 12:41 AM

no there's 8 of them I suppose 9 now now With Steve and !0 if you want to count the World war 3 story were is said Ben Grimm is a member they're Called Team 7 because they're the 7th incarnation of the Unit

So he hasn't been written out of the JLA after all. I guess by making him part of the team's "secret history", Johns is trying to give him a more interesting role than least loved founding member. Let Cyborg be the Magnificent Seven's Horst Buchholz.

I have to admit that seeing our boy kicking the crap out of everyone in the JL was a lot of fun. Take that for leaving me out.

Kyle (and I suppose in the early days, Hal) were Horst Buchholz. J'Onn's Brad Dexter.

I just did a little happy dance.

I loved J'Onn as the heart and soul of the JLA, and I might be miffed if this were in the old continuity. That said, that sense of security made J'Onn "safe," and safe is boring. In the nU, he has secrets, and an agenda, which gives him a necessary edge if he hopes to ever be successful as a solo character. He needs to be more than Uncle Leaguer, and this helps.

Having picked up the issue yesterday, I believe that we see a key difference between Stormwatch and J'Onn and the much-vaunted and public Justice League of America. While both teams began their current runs as very disorganized (Sorry, Paul Cornell, I expected steak and you delivered a hamburger.), they have approached the issue of trust differently. J'Onn and the members of Stormwatch were betrayed by Harry Tanner, but still had the ability to trust new members like Apollo and Midnighter. (Apollo has come up as more likable than Midnighter, but may have a chance to prove himself to be more like his old persona than a self-righteous jerk.)

The Justice League seems to be afraid to trust, to open their hearts beyond their own small circle for fear of betrayal. So, who is more heroic -- a Martian and his allies who ARE willing to trust others despite past betrayals or a Kryptonian, an Amazon, a speedster, a Dark Knight, a king of the sea, Hal Boredom, and to quote Frank "the Thing with batteries."

J'Onn may have his secrets and may be trying to prepare others for great troubles ahead, possibly even a return of unenlightened White or Green Martians. (Indeed, possibly all J'Onn's actions are part of a long term plan to make sure that Earth will not suffer the fate of Mars and other worlds -- even if he has to test Earth's would be defenders who too often prove to be their own worst foes.) So, testing the skills of the Justice League was one thing -- and they were found wanting. However, the lack of the ability to trust and expand their circle shows perhaps that the League is in J'Onn's words "still not ready." Or as he might say paraphrasing the play Hamlet: Their faults are not in their stars, J'emm, but in themselves.

As for Trinity Wars, if it is what I fear it will be, I think that a greatly improved Stormwatch should show up at the end of it to berate the Trinity and stick them with a large bill for having to clean up after their mess. (Why do I think that every nutcase in Gotham City and Metropolis would take advantage of this situation. They might as well send Lex Luthor, Ras al'Ghul and Diana's foes chocolates and Valentine Day's cards.)

Will, I've been a supporter of J'Onn in Stormwatch as a concept for a while now, but I have to add, as bad as Cornell's run got, I much preferred reading it over Justice League. Stormatch was built to be snarky and murky, but compared to the 7-nUp, they're much more likeable and familial. They can go to new places and do interesting things, and I look forward to better writers entertaining me more thoroughly.

I haven't cared about Superman or Batman in years, I never cared for Cyborg, and I friggin' hate Hal Jordan. I don't recognize Wonder Woman in this universe, and while I like Barry Allen, I find the Flash as a premise boring. That leaves Aquaman, and that's not enough to support my interest in a team in general, much less one as poorly written as this one. These guys collectively are jerks having thuggish, stupid battles that take five minutes to read. That's not my JLA, and as someone who read Jurgens, Vado, and Jones, I'd take the Yazz over this current incarnation. Also, if they're that emotionally guarded, you're right, they are pretty wussy with their hearts.

I suspect Johns is going to do a rewrite of JLA: Year One, where J'Onn was gathering data on the team, but this time reporting to the Shadow Lords. Regardless of the right or wrong of that, the revelation was going to bring League fury down on J'Onn. I don't think he was testing them as Stormwatch was recently put through their paces-- just busted being true to his real team.

This sounds good, but I wonder if part of the reason that the Shadow Lords sent J'Onn to learn about the Justice League is to see if they are ready for the sort of challenges that may lie ahead of them -- or if they are a threat. From what I have read of the current Justice League run, it really does not sell me -- although I perhaps like more of the characters in their own books. (I still have some criticisms, for example, one would think that someone as smart as Bruce Wayne is supposed to be would realize the value of not always coming across as a jerk -- particularly to those closest to him.)

I hope that we get to eventually understand why J'Onn thinks that they are still not ready. I imagine that the Justice League still has no idea that Stormwatch exists and I doubt that J'Onn has run into any of the individual leaguers since then without their being a fight. (It seems that the League members have not run into J'Onn based on the dialog. However, I would not be surprised if J'Onn has run into some of them without their realizing it.) The League still seems a bit unready, and I think that there are more possibilities with Stormwatch. At least they had the sense, in all the problems of the first six issues, to try to protect innocent civilians during a disaster. The League, not so much.