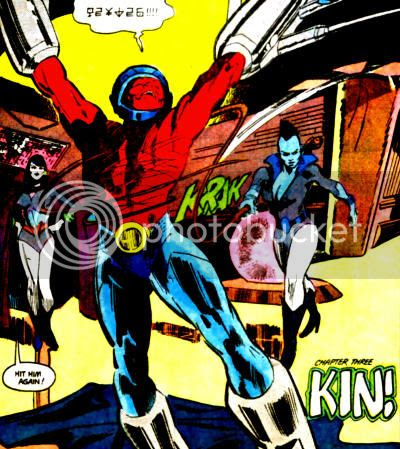 "For the wise man, kindness is an act of bravery. The learned know that kind acts are not always returned in kind." --from the teachings of Rahani


Held captive by White Saturnians, Jemm and Bouncer were separately bound, tortured and interrogated. Along with Luther Mannkin, the group was held on the flagship of the New White Saturnian Army, "guarded by an entire legion of... Koolars and Robot Warriors." Supreme Commander Synn informed Jemm that special bonds negated all of his powers, and attempted to extract knowledge about any other surviving Red Saturnians. When torture failed, Synn tried seduction, only for the ever silent Jemm to spit in her face. "You... Red... PIG!!!" Synn wiped herself and lashed out with a tremendous blow to Jemm's midsection. "...You'll either tell me what I seek to learn or I'll bring that young Earth-boy in here... the one you seem so fond of... and I'll dissect him before your very eyes!

A Koolar lieutenant requested the boy, only for a subordinate to inform her that Luther had managed to slip away when her back was turned for a moment. Mannkin found himself in Synn's private quarters, where he was hidden by her sex slave, Farr. A Koolar searching the area beat Farr when his unbearable arrogance saw him speak to her without first being spoken to. Synn arrived soon afterward to dismiss the Koolar but continue Farr's disciplining. "Never again make a public display of the liberties which I allow you in the privacy of my chamber! Don't you know that any Koolar may order your execution at any time she pleases? I wouldn't want to... lose you, Farr." 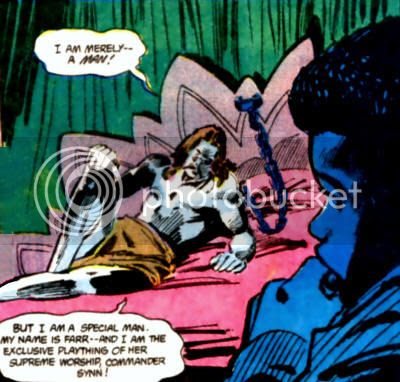 Superman hovered in the sky over New Bhok, located on a moon of Jupiter. The Man of Steel waited for someone important amidst the crowds wagging their alien tongues to show up and greet him. That someone turned out to be Jogarr, who had studied Earth's history, language and heroes in his youth. "I know that any visit from Superman is a great and humbling honor!"

Jemm wasn't in the habit of spitting on people, but had intentionally provoked Synn in hopes of weakening his bonds. Soon enough, he had worked a fault to break free, then escaped into the industrial-sized garbage drains that carried the ship's detritus into outer space. Using his birthstone, Jemm sought Luther, while the Koolars detected their system's breach and gave chase. In route, Jemm felt the hatred and fear in each of the Koolars through the Mark of Jargon. The sewage was infested with pengii, a Saturnian vermin that was like a cross between rats and piranha, and could tear apart large prey in seconds. Luckily, Jemm could fly over the biting beasts until he crashed into Synn's quarters. Catching the Commander by surprise, Jemm wrapped Synn is his cape and slammed her against a wall. Luther ran out from under the bed to hug Jemm, who extended his hand to Farr. "Come with us and know freedom!" Farr asked if Synn was dead. "I do not kill my own kind." In that case, Farr refused, as he needed the intimacies he shared with Synn. Koolars burst into the room, just ahead of the pengii falling in on them. Even though Farr was still chained to a bed, Jemm and Luther bolted, leaving the mess to the Koolars. 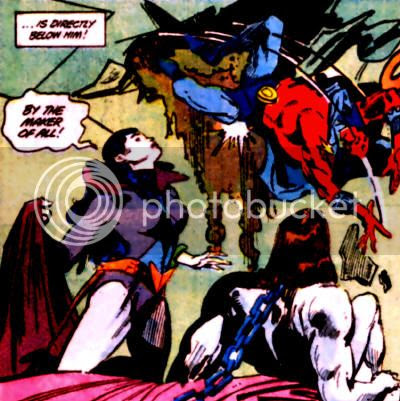 Running down a corridor, Jemm sensed Bruiser, and liberates him from his cell over Luther's concerned objection. Jemm likewise had reservations, but could feel Bruiser's shame, remorse, and childlike terror. "Can these be the emotions of a killer?" The Koolars Teeka and Bruzz were playing checkers instead of properly guarding the shuttlecraft bay, so Jemm made short work of them. The trio of escapees filed onto a small away ship, Jemm beckoning for the timid Bruiser, and then departed.

Superman had located New Bhok using an "Ascorbatron" on loan from Hawkman, completely butchering its proper name of "Absorbascon." Motivated by guilt over his treatment of Tull's alien and overcoming his assumption that there had been no one living on Saturn, Superman was now seeking to make amends. Jogarr had thought that every single survivor of the Great Holocaust was on New Bhok, and when Superman described Jemm, Jogarr confided his lack of relief. "I thought he was dead. He is my cousin, you see. And though I've never met him... I truly despise him!" 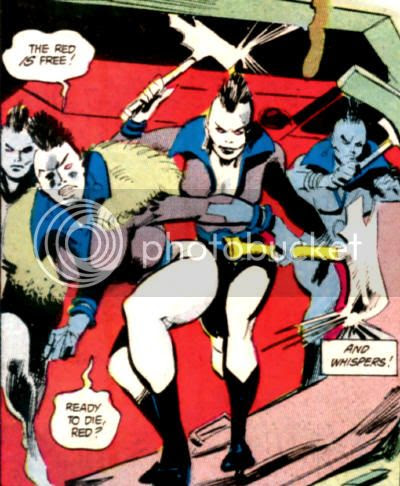 "Kin!" was by Greg Potter, Gene Colan and Klaus Janson. A mistake identified this story as "Chapter Three" on the splash page. Already an especially grim n' gritty book, even by today's standards, Jemm really went over the top with all the kinky violence beginning in this issue. The rampant BDSM in this issue makes it clear how a relative unknown with a string of abysmal sales failures got to write the 1987 Wonder Woman relaunch for a hot minute before his swift ouster barely into the run. I could see how a gender ratio of 1:125 would allow for puny male White Saturnians to be enslaved and molested by female warriors, but the part where they could be executed at will doesn't make a lick of sense, given their value and scarcity. That's just dark for darkness' sake, and the set-up is so skeevy I can't recall seeing its like in any other mainstream comic (although Eros Comix and the like would be another story.) Superman's effortlessly locating New Bhok was surely another artifact from the days when it was supposed to be Mars II, which he had visited numerous times.
Posted by Diabolu Frank at 12:00 AM

There are a lot of logic holes in this story. I think that any males among the White Saturnians would be valued and protected. Still, there is a lot of J'Onn's background refigured for this story.