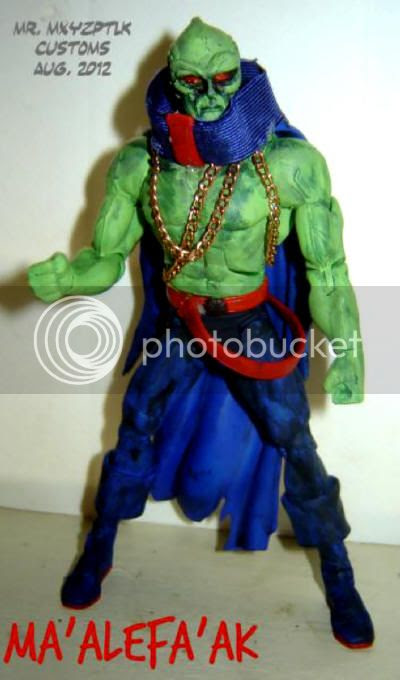 "I had an extra Martian and couldn't quite dedcide waht to do with it. Modern? White Lantern? Ma'alefa'ak? Justice Lords? Almost went with Justice Lords, but decided I'd rather have another villain on the shelf instead. Based his appearance mostly on his look ing "Doom" but researched the character and found no consistancy to his look, so I took some liberties. Wanted to keep the "rain catcher" on the cape, but couldn't get the look to come out right. Used sculpy on the head, paint, fabric for the collar, and real chain.

Oh, I do, and so can you with more perspective shots here!
Posted by Diabolu Frank at 1:12 AM

Nice job Mr. Mxy. I don't own a Martian manhunter but if DCUC does us right I will have a Ma'alefa'ak. I'd like your version.

Martian Manhunter toys always get discounted, so I rarely buy them new at full retail. The New 52 one is a must though, and I'd pick up a Ma'alefa'ak directly, for sure.