March Madness: The Mediterranean: Round 1 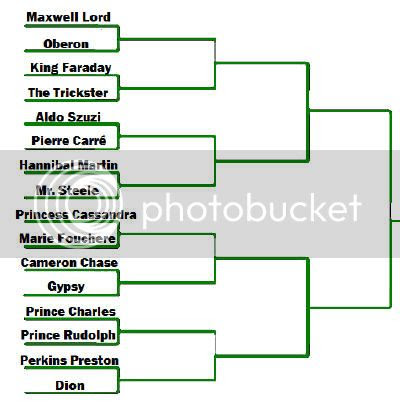 For some time, J'onn J'onzz was active in the Mediterranean under the orders of a special secret department to demolish the world-wide criminal organization VULTURE and unmask its faceless leader, Mister V. J'onzz assumed the identity of international playboy Marco Xavier, taking up residence in the posh villa of the assumed dead accomplice to VULTURE...

J'Onzz's early taskmaster, Mister Steele, had arranged a meeting at the Carré Company to discuss an extraordinary new weapon being devised there. Unbeknownst to him, the U.S. State Department's Hannibal Martin had put together his own task force to acquire the invention by any means necessary...

Pierre Carré had prepared to greet the well-heeled philanthropist Aldo Szuzi, not realizing this acquaintance had been brainwashed to murder Carré and make off with the prized armament of his company...

Maxwell Lord IV had managed to con his way into the Carré Company to discuss the same planned charity gala as Aldo Szuzi, and had the same ulterior motive. However, Carré had recently begun contracting the services of "Meta Movers," which specialized in the boxing and transport of paranormal materials. The outfit was run by Oberon, who recognized the treacherous former friend responsible for so many of their mutual acquaintances' premature demises...

Tom Trent had been helping out with R&D for Carré, applying his skills as "The Trickster" for a greater good. King Faraday wasn't convinced by the face turn though, and felt the best way to prevent Max Lord from acquiring the weapon was the direct approach. In order to steal the device, the spy had to go through Trent...

Elsewhere, rock n' roller Perkins Preston had faked his death and been set up at his good friend "Marco Xavier's" villa. The trouble with the place was that under its former owner, a quirk related to the destruction of the Diabolu Idol-Head had connected the villa to the House of Mystery, unleashing all manner of kooky spatiotemporal anomalies. For instance, a hero from the year 500 B.C. named Dion had mistaken Preston's hillbilly guitar jangle for an invocation of the demon Belial, and proceeded to attempt to sever Perkins' head from his neck...

Similarly, the modern European nation of Harovia was invaded by the forces of the 15th Century French Prince Charles in the name of the Lord God, forcing Prince Rudolph to defend his way of life from virtual barbarians...

Caught in the conflict was Princess Cassandra, who had been visiting Harovia under the guise of diplomacy. Marie Fouchere of the French Secret Service had her own suspicions about Cassandra, and expected extraordinary rendition might yield the answers she sought...

The U.S. Department of Extra-normal Operations was not unaware of the building metaphysical disturbance in Harovia, and had dispatched Agent Cameron Chase to investigate. Gypsy watched the watchperson invisibly, prepared to take her out if she got too close to an uncomfortable truth...

"You Ain't Nothing But A Wanderer." Ha!!

That match totally happened just to set up the reference.