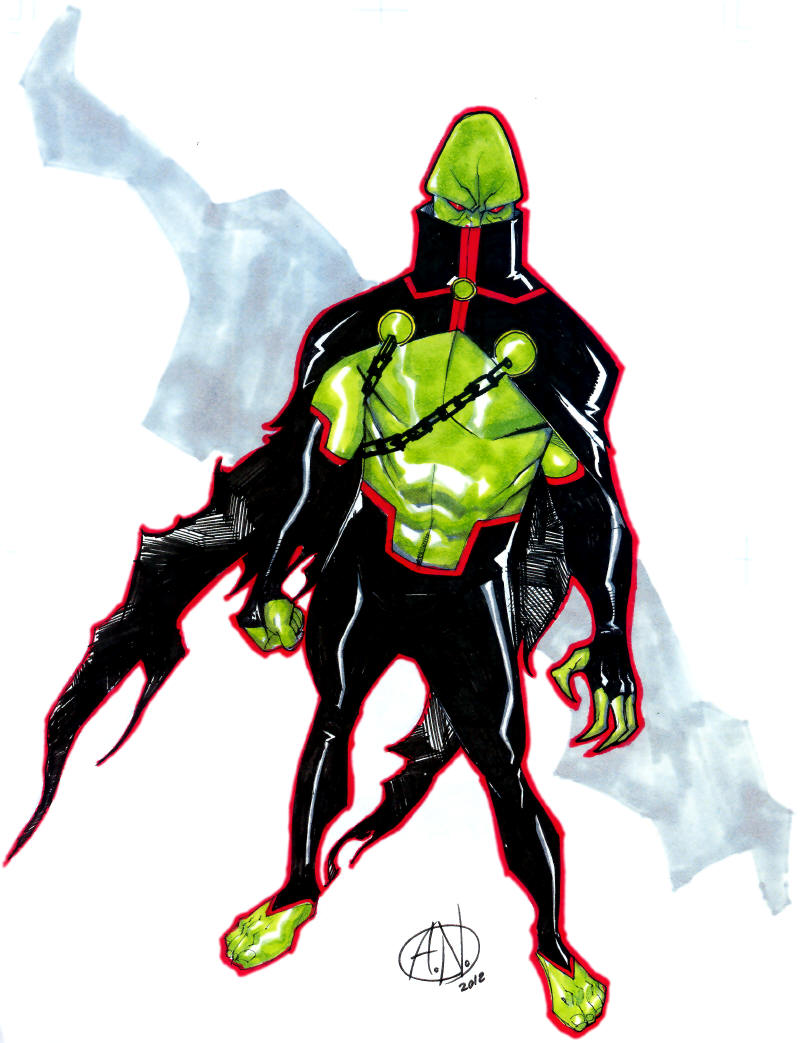 Comicpalooza's layout was much improved in 2012 over the previous year, but one issue was a lack of conformity. By this I mean that the artists tended to be grouped on the right side of the main hall, the dealers on the left, and miscellanea sprinkled within each camp. That's an oversimplification, since there were whole regions for autograph booths, cosplay and so forth even further left, not to mention two other halls of different stuff, but we're sticking with the two sections that mattered to me. Moving along, I obviously spent most of my time, money and energy on the artists' side of town. However, there were publishers to the left with artists also doing sketches, which went unnoticed by me until late on Saturday, by which point I'd pretty much decided to wrap up my fifth anniversary spending spree. Adrian Nelson, who'd done a kick-ass Bloodwynd Commission in 2011, was shut out as a result.

Two months later I was at the considerably more intimate Space City Con, and recognized Nelson. We shook hands, and I related the gist of the first paragraph to him. I learned that he had seen the post we ran on his piece, and asked after a new one. I didn't know in advance that Nelson was coming, and instead of picking a subject for him, I handed over most/all of my stack of reference so that he could choose his own. As had occurred previously, the artist took his time thoughtfully looking over his options, so I offered some commentary. The one I remember most is Futureman, when we both acknowledged that the character is visibly a collection of phallic symbols. I think maybe Cay'an, Gammeron, and Jemm were in the running at some point, but the recollection is unreliably hazy. As it happened, I'd already picked up the Whilce Portacio Ma'alefa'ak Commission, so the reference was back in play, and Nelson pulled it right back out again.

Ma'alefa'ak was created in 1998 to be the evil twin brother of J'Onn J'Onzz as part of the launch of what remains to date the only Martian Manhunter ongoing series ever. As designed by Tom Mandrake, he was a lankier version of the Alien Atlas with long nails and piercings, outfitted in a fairly basic barbarian-style tunic type thing featuring chains. The same outfit returned later in the run drawn by Eduardo Barreto, but when Rick Leonardi drew him during a stint on JLA Classified, he ignored everything but the basics. Truth to tell, Mandrake himself never seemed to settle on specifics to his own design, seeming to still be playing around with it from panel to panel. There wasn't much of anything on the internet to be found in the way of fan art in the years since his creation, until Justice League: Doom. The 2012 direct to video animated movie offered fetishized redesigns of most of the villains featured in its narrative, and none seem to have lived past the cartoon except Ma'alefa'ak. Not only did the show give Ma'alefa'ak his widest audience ever (and teach them to pronounce his name "Mallah-fah-ock,") but it seems to have fired the imaginations of many fan artists. I "assigned" the animation style Malefic to Tyler Kirkham, but Whilce Portacio and Adrian Nelson selected him on their own and in preference to the original comic book design I also had reference for. Plus, Nelson still wanted to draw him even after we had talked about Peckerman and I then segued into all the incestuous homoerotic tension Malefic projected in the cartoon. That's a testament to the appeal of the redesign. 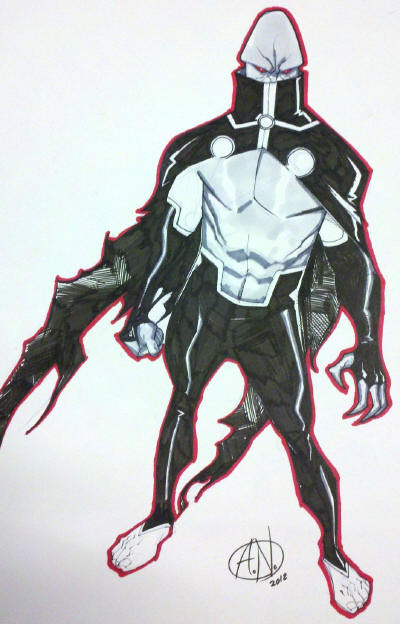 The first time I was going to get a commission from Adrian Nelson, I expected something from the Michael Golden/Jason Pearson school reflected in his portfolio. His Bloodwynd was much more somber and contemplative, better suiting the character. Since the Bloodwynd image was what was stuck in my mind, I was surprised by the Michael Golden/Jason Pearson style take on Ma'alefa'ak. I was even more surprised that it was in color. See, I'd told Nelson on Friday that I wouldn't be back until Sunday to collect the piece, so I think he colored it to use as a demonstration piece free of charge. I then showed up relatively early on Saturday, when he was putting the finishing touches on said colors. I said he could hold on to it another day, but I didn't really mean it, and he didn't make me abide by it. Come on, man-- would you leave this beauty on a table if you knew it was yours for the taking?

Nelson traded out the blues and most of the golds for solid blacks, so there's a point off for fidelity, but he very clearly kept the surprisingly well detailed bare feet, which gives him a point back. Gray strokes are apparent in the original 11½" x 16½" art, but I bumped up the contrast on the scan to make them pop here. I like how the crosshatching on the cape is like an inverted callback to the crosshatching around the cape in the Bloodwynd piece. I think the attitude on display here is closer to capturing Ma'alefa'ak that the more serious, sober versions linked earlier. I like the perspective, which makes it a great companion to my Dave Johnson Martian Manhunter. Since I moved and had the glass frame shatter on my Andy Kuhn Doctor Trap Commission, I've decided to only frame color copies from now on. I think I'll have a professional color "The Reverend," then hang the recently redesigned J'Onn and Ma'alefa'ak J'Onzz side by side. Sweet!

Next time I see Adrian Nelson, I promise that I'll pay for color and let him keep it for weekend display. Or just give him the color copy I used for scanning. Probably that second one. Also, I'm going to try pre-selecting a character with him in mind, just in case, to show I care and to give some unrepresented guys a chance against showboats like Malefic. The Art of Adrian Nelson blog, it's gallery section, and his deviantART page should be a big help!
Posted by Diabolu Frank at 12:00 AM

Very good artwork. I wonder if or how Ma'alefa'ak will fit into the New 52.

"When," I'm confident, likely in Justice League of America. I suspect that he won't be the only evil Martian around, either.