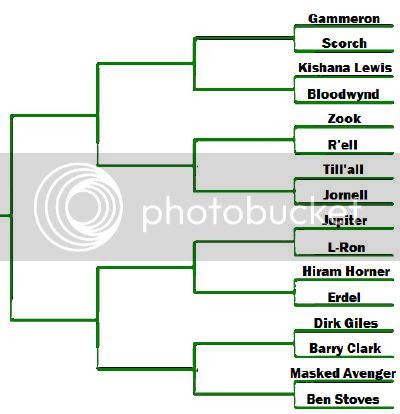 An apartment in Middletown was no place to keep a super-powered otherdimensional pet, so the Martian Manhunter moved with Zook to a secret mountain headquarters accessible only through a passage the size of a mail slot. That was no problem for the elastic form of Zook, but it was an issue for the host of unwanted visitors clambering about the area. Zook not know why people try to get in house, so he check out. Ran into R'ell, from same dimension as Zook. They fight...

Dirk Giles' fascination with the Manhunter from Mars was more through osmosis, thanks to his attempts to woo a girlfriend that hadn't been won over by his millions. Actor Barry Clark sought to more fully inhabit the role of the Sleuth from Outer Space, and would not brook some dilettante trying to accomplish through cold cash what he pursued as art...

Zook wasn't John Jones' first pet, and Jupiter the dog was sniffing out the region for his Martian master. The pooch lit into a barking fit when confronted by an entirely different element of other-worldliness, J'Onn's little robot buddy L-Ron...

Kishana Lewis loved the woods, but a more tangible affection had brought her to this mountain. Despite her touch of fire, she hoped to work things out with the Manhunter she adored, and wouldn't settle for a substitute. Not even Bloodwynd, whose motivations as ever were entirely his own... a supernatural drive that demanded the blood of the woman before him...

Erdel had brought J'onn J'onzz into this world, and his reconfigured robot brain could now take him out of it. Erdel's technology was hidden under these stones, and he was set to reclaim it. However, an urge had come over amateur inventor Hiram Horner to pay this area a visit, and dueling sciences were now inevitable...

The Masked Avenger was brought out of retirement to safeguard Horner on this trip, and sure enough, a fiend from Middletown had reared its furry, precious head. Ben Stoves would always be grateful to the Martian Manhunter for helping him see the straight and narrow, but a Human Squirrel's gotta get a nut, if it meant swatting Horner's millionaire ass against every tree in the forest...

Till'all was heartbroken, having been abandoned by J'Onn J'Onzz almost immediately after his father was killed and what was left of his surrogate family locked away. He was shocked to spy the diminutive Jornell alive and well, but even more startled when the White Martian accused Till'all of being a race traitor deserving only a swift execution...

Glenn Gammeron was on the trail of fresh bounty-- some little redneck girl with a crush on his former associate from Mars whose known accomplices included the Joker. Scorch had never forgiven J'Onn for the lobotomy his evil throwback self Fernus had inflicted upon her, and she was prepared to torch the entire forest to burn him out for revenge...

Posted by Diabolu Frank at 2:58 AM

I soooo want the 'Elite Eight' matchup in this bracket to be Scorch vs Erdel.

For the first time since we've been doing this, I'm following March Madness rules(I assume from ignorance) and allowing the brackets to dictated the matches beyond the initial launch. That means, based on current votes, Scorch has to get through Bloodwynd and Zook to get to Erdel in the final two of the bracket. It's doable, but I see Zook as the favorite to take the Secret Mountain Lair division...

Erdel is your bracket's Butler. A Cinderella story!

Thanks for this. So much fun!

How do they resolve ties? I seriously don't know.

There are no ties.
Sudden death overtime until a winner declared.

Here, I think you would be the swing vote.

I like that. Sudden Death Overtime from now on!