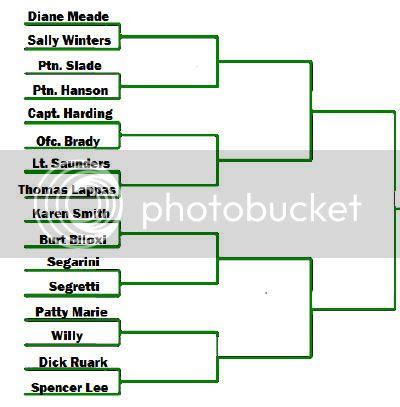 When J’onn J’onzz was first stranded on Earth, he chose to make his home in quaint, quirky Middletown U.S.A. Joining the local police department, “John Jones” served as a detective for many years alongside the proud patrols of the fair city. Today, the burg hosts a law enforcement convention that has attracted luminaries from across the nation… to their grisly demise.

Officer Pat Brady had a long if undistinguished career in Middletown, and retirement was not what he hoped it would be. Brady looked to his former top supervisor, Captain Harding, and saw a life he felt should have been his. Brady even sort of looked like Harding, but not for long, once Pat shoved his old snubnose under the Captain’s chin. They’d remember him now and forever…

Obliviously, Harding’s nephew Willy played Cowboys and Indians with his cap guns in the ballroom, where celebrity game show contestant Patty Marie was a special guest. Willy’s clean cut suburbanite looks triggered traumatic memories in the child star of a dark night in a hotel room in Vegas, and nothing gives a little girl a sense of empowerment like a Smith & Wesson on loan from a tipsy desk sergeant striking out with two pretty ladies…

Patrolwomen Sally Winters and Diane Meade couldn’t be bothered with the advances of a desk jockey with their longstanding rivalry flaring up. Meade’s disdain for Winters previously led her to acts of sabotage that nearly killed an innocent child. Today, she would take no chances, leaping at Sally with the intention of clawing her eyes out…

Segretti mocked Sergeant Bob Segarini as a bloated slob who couldn’t find a crook hiding under his swivel chair. Bob knew his computer skills caught far more criminals than Segretti’s constant staking out of area donut shops, and was sick of always being confused with the jerk. Sick enough to bash his teeth down his throat barehanded...

Hero cop Mike Hanson was posturing as usual, telling of his many triumphs in the field amidst a circle of fellow officers. Patrolman Slade was proud of his own accomplishments, never seeking the spotlight, a humble servant. Hanson wasn’t so special. Bash his skull in with a truncheon, and he looks just like any perp asking to be brutalized for his transgressions…

Lieutenant Saunders did his best to one-up Hanson, crowing about having been responsible for hiring the greatest cop in Middletown history, the late John Jones, and having mentored him in his early career. Thomas Lappas was one of Jones’ earliest friends, opening his home to the man, and didn’t appreciate Saunders aggrandizing himself through the memory of a fallen officer…

Burt Biloxi ran his own private investigation service in New York, and claimed to have hired a remarkably similar John Jones to work out of his office for a while, just a few years after Middletown’s was supposed to have perished on grand fashion. Karen Smith, also a dick, sneered at all the glorifying of Jones, who she remembered as a secretive liar. Fighting words, surely…

Television reporters Dick Ruark and Spencer Lee angled to cover the row, each in their own distinctive styles. Lee was of course putting his own tainted spin on the proceedings, and though usually a more passive documentarian, Ruark began lobbing agit-prop questions at Lee. Spencer was never known for cool temperament, and a shouting match soon followed…

Just in case anyone finds this troubling or in poor taste, trust me why doncha?

It's The Martian Detective meets The Hunger Games!

I can't wait to see who wins. I have a few favorites who I think will it to the final four.

I'm pretty confident about who will probably make the final four, and I'm fairly certain who'll take the top prize, but I'd be interested in hearing your theories...

I just re-read both Slade and Hanson's appearances and that is a really tough call--nice match. Some of these are really hard.

Final Four? I'm pulling for Diane Meade, Erdel, and Patty Marie, and Harding, if he was in a different bracket. And I'm sure Zook won't go down without a fight, either. The Cinderella team is The Human Squirrel.

It'll get really exciting when the Silver Age characters go up against those OYL characters...

There's two more sets of brackets, so it wasn't really fair to ask your final four yet. I think it'll come down to Meade and Harding in Middletown, while I figure Zook takes the Lair (barring spoilers Bloodwynd and Scorch don't snatch the victory.)