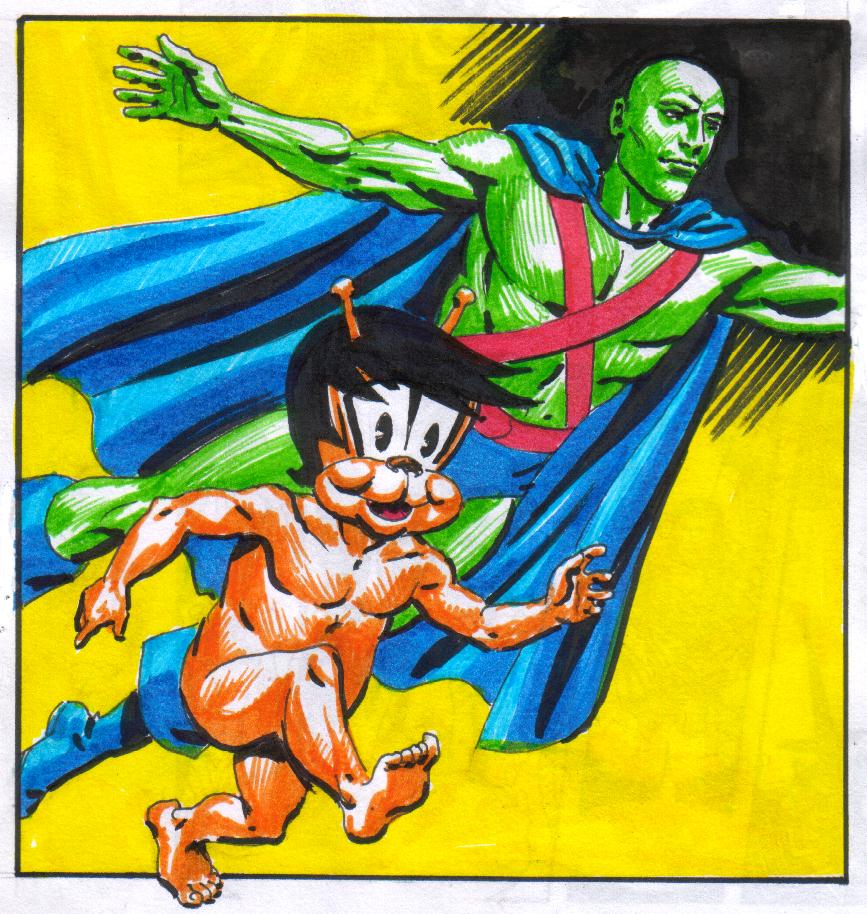 "When the Martian Manhunter, assisted by his interdimensional tiny sidekick Zook, lived his adventures in the back pages of Detective Comics first, and house of Mystery afterwards. When the great Joe Certa illustrated Jack Miller´s scripts..."

I've repeatedly attempted to do spotlights for J'onn J'onzz's otherdimensional pet/sidekick, including a week last year, but it never seemed to work out anywhere near to my satisfaction (nor that of a small but critical minority I've heard from.) Once I learned that Argentine comic book artist Enrique Alcatena had produced a whole series of pieces based on stories from the later years of the "Manhunter from Mars" strip's run, the majority of which featured Zook, I decided that I was going to make January of 2014 truly a celebration of the Happy Zook Year!
Posted by Diabolu Frank at 12:00 AM

Am I the small but critical minority? Haha.... (I'll take Zook + Silver Age J'onn over N52 J'onn + no Zook if that helps any.) Someday I may just reconcile my feelings towards him. Figuring out whether he's a pet or sidekick is step one for me.

Hey, at least you found an artist who incorporates Zook, and that's something. I really like how he draws J'onn, too. I miss the classic look.

I don't recall your ever pushing for expanded Zook coverage, so not really, no. Anyway, I say exceptional pet sidekick, like Krypto.

Thank you for posting my pin-up, Frank! I´m a devoted fan of the Miller/Certa´s years, and I loved trying to recreate their particular charm in a series of illos. All the best,
Quique Alcatena

You did a wonderful job, sir!

I think Zook is great. I have a real affection for the Silver Age goodness as represented by the little guy!