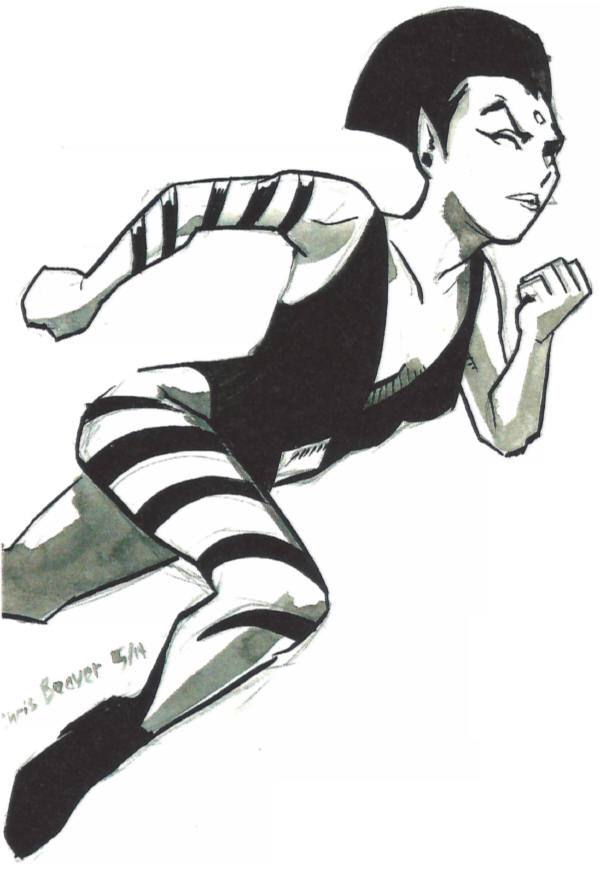 Chris Beaver is one of the artists I return to again and again for commissions, because he hit it out of the park first time out to bat with The Human Squirrel at 2012's Comicpalooza, a fun piece I was fond enough of to make a color copy and have framed next to my desk at the old apartment. He followed that up a few months later at Space City Con with Hunter Commander J'en, and the following year with one of my absolute favorite commissions ever, Kishana Lewis. I can't get a scan to capture his beautiful color work in that piece, so sometime I need to either take it to a professional or hang the original. Most recently, he contributed to this year's Aliens 30th Anniversary commission series with Corporal Cynthia Dietrich, but we sadly had a dry spell in 2015 because I'd committed so much time, effort and especially money to a series of jam pieces begun in 2014. Beaver contributed two black and white pieces to two separate jams begun that year, one hero and one villain. The heroine is Princess Cha'rissa, fiancé of Jemm and secret lover of J'Onn during murderous intrigue between the red and white-skinned Saturnians. These damned jams won't be done until 2017, and as I'm piecemealing them character by character all this month with plenty to spare, I've reserved the remaining space for new artists and the new year. It's all well and good, because what I really want is to plot out another full color piece like that Kishana Lewis, hopefully next year... Chris Beaver
Posted by Diabolu Frank at 12:17 AM