Adrian Nelson is another local artist that I can reliably call upon for excellent work, which to date has included commissions of Bloodwynd, Ma'alefa'ak, H'ronmeer (and other art finishes on the J'Onzz Family Portrait,) & Private Ricco Frost from the movie Aliens. This time, his subject is Glenn Gammeron, intergalactic bounty hunter with mysterious ties to J'Onn J'Onzz that date back to the plague which claimed most life on Mars. This was my second pass at a piece featuring the sketchy character, who once took on Despero and should absolutely return to that Martian Manhunter fold for further adventures. I love Nelson's take on the character, which vaguely recalls Larry Stroman, and the scans don't do justice to his crosshatched shading. 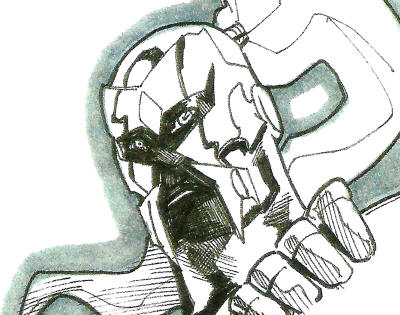 Posted by Diabolu Frank at 9:13 PM