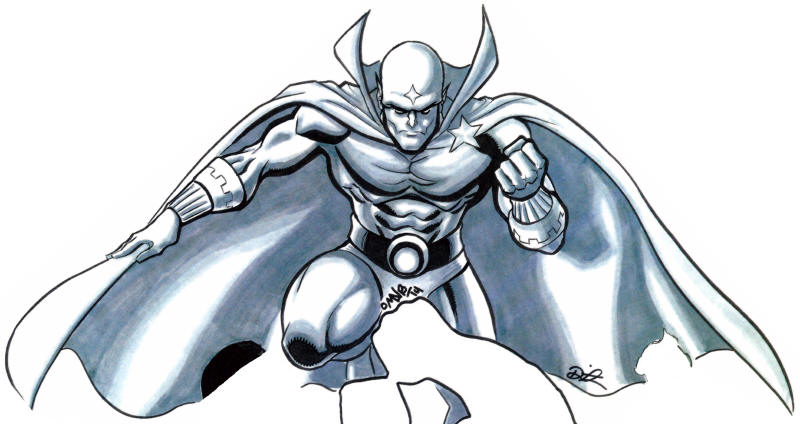 Okay, so I was aware of Dietrich Smith's work from the late Chromium Age moving forward, but was most impressed with his more recent color work, which is what made me decide to ask him to draw K'hym J'onzz for the family portrait jam. I really liked that, so then I went back and asked him for Jemm, Son of Saturn on another jam piece. I also dug that, so I tried to go back one more time at the same show for a solo piece, but by then he was all booked up. Another show comes around the following year, and I've got him pegged to draw Carter Burke from the movie Aliens at a point when I thought I was going to do a series of jam pieces, but plans changed so that I only got one done. So maybe, hopefully, I can finally turn Smith completely loose on a piece all his own next year?

I'd gotten Jemm done once before, but I felt he played such a major Alien Atlas-specific role in "Rock of Ages" and in the two most popular story arcs in Martian Manhunter's eponymous 1998 series that he deserved representation in the jam. I'm glad for it too, because this is a very regal prince with his high collar and billowing cape. This was another instance where the jam had a big chunk of space that needed to be filled to feel "done," and Smith absolutely took ownership of that property with a gorgeous spread across that real estate. I never give artists J'Onn reference with the "vampire" collar because I don't feel it suits the Sleuth from Outer Space, but Jemm was created with one, and here he rocks it like a ruby peacock. I love the shading, and looking at it again makes me hanker for that future Smith work!