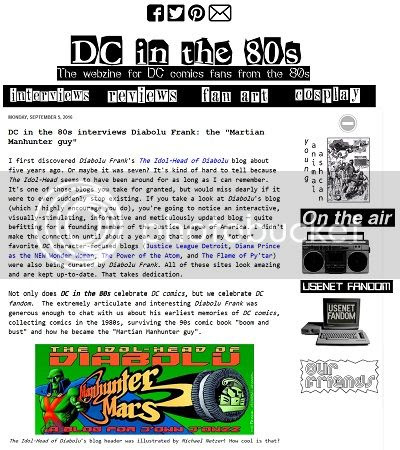 The crew over at the DC in the 80s; including Mark Belkin, Michael Alan Carlyle, Susan Hillwig, Gracja Nowak, and frequent shower of Diabolu Twitter love Chris Sheehan; have been doing great work the past couple of years stoking the fires of nostalgia for one of the best and most important decades in comic book history (especially for Detective Comics Comics!) I particularly love their use of uncommon and rare promotional artwork in relation to coverage of various releases, as seen on their swell tumblr. Why they'd want to louse up their winning streak by talking to me I'm sure I don't know, but webzine editor Justin Francoeur decided to poke around in my idle-head until a lengthy interview popped out (and I also think he let The Doom Shadow loose again, but that's another story.) It's all terribly ME-centric and "inside baseball" beyond even my previous indulgences here. I talk a lot about my early collecting history, perceptions of the rise & fall of the direct market, why this blog/podcast exists, and some general info on Martian Manhunter and Despero. You can read the interview here, which is probably asking a lot of folks given the lame-o who vomits up most of the words, so you might prefer to just skip ol' Frank and go right to following the quality 'zine via Twitter or Facebook!
Posted by Diabolu Frank at 12:34 AM