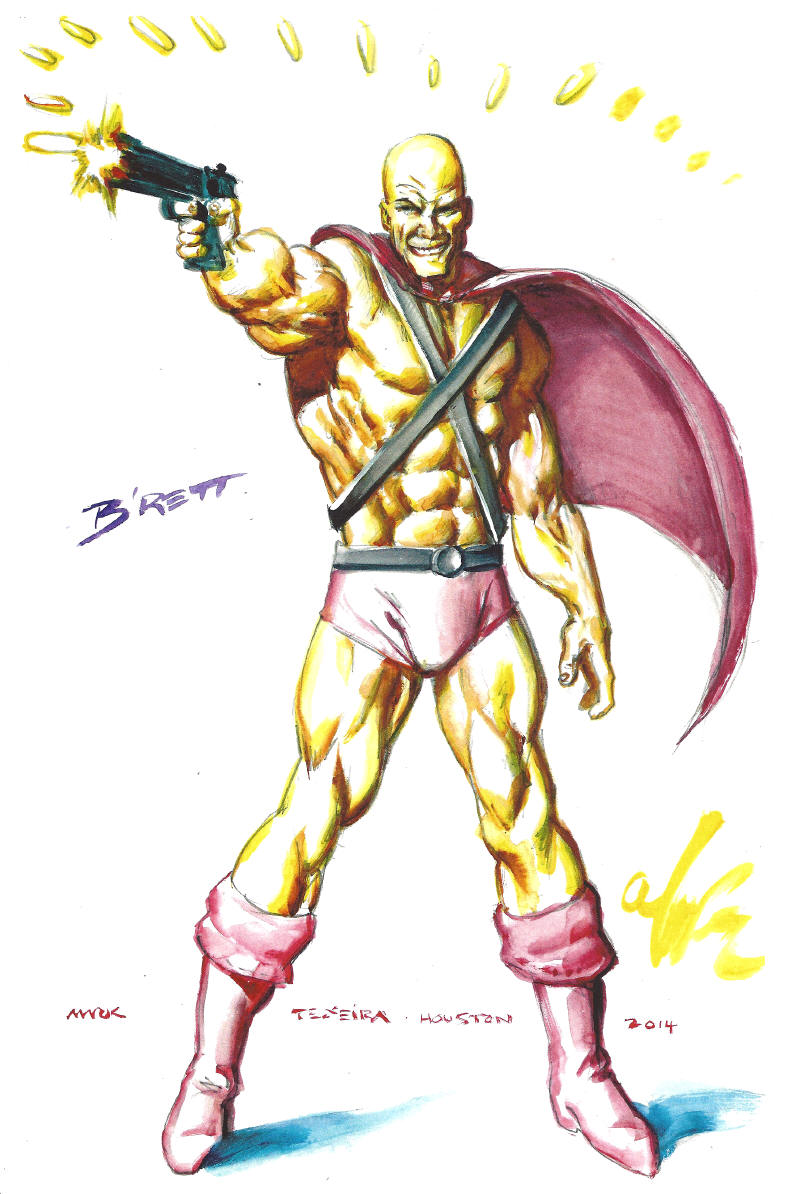 The people behind me in line for Mark Texeira must have hated me. They were all getting comics signed or quick sketches on backer boards, and I roll up with an 11"x17" jam commission that Tex would ultimately fill a quarter of involving reference materials and lots of back and forth discussion. Then what do I do? I ask about getting a full solo commission, complete with waterpainted color! The nerve of this guy right here, typing about the two awesome pieces of Tex art I got for an entirely reasonable price which I admire greatly! Can you tell how little shame I feel over grinding that line to a halt?

So long as I was able to get a full commission from Tex, I knew I wanted him to do one of the most conceptually complimentary but least seen Alien Atlas Adversaries, the yellow-skinned Martian B'rett. I've liked the Xanthic Bandit for a long time, and it shows by the number of pieces I've gotten of him, probably the most of any single character outside J'Onn J'Onzz himself. The problem was that I had a very specific idea of how I wanted B'rett rendered, and despite getting some dynamite pieces of him, none quite matched the crystalline ideal in my mind. I wanted that grinning menace of a ruthless, brazen, but not exactly fearless foe, and I felt like Tex was my best shot at finally scratching that itch.

My recollection is that I watched Tex draw Vandal Savage, but left him with reference for B'rett to work on when he had time after taking care of the folks behind me. Toward the end of the day, I came back to see Tex's finished pencils, but he hadn't had the chance to apply any paint. I think I offered for him to keep it overnight, but he had already mixed the rather distinctive colors on his palette and was ready to get down to it. By this point, the con was announcing that the dealer's room was closed, and before long, lights were being shut off and security was eyeing us warily. Tex dismissed any concern, basically saying that as long as we were with him, nobody was going to bother us. Sure enough, I and a collection of onlookers got to watch him do the full Bob Ross demonstration as he discussed pestering publishers who wouldn't meet his quote but wouldn't stop calling, his training background in fine arts, and more fascinating insights into the life of a painter in the modern comics industry. When he finished well after closing time, I giddily took the wet piece out to the lobby, admiring it as I watched it dry and waited for the rain outside to subside. I wasn't taking any chances with this baby.

It should go without saying that Tex finally nailed the malicious, trigger-happy spirit of the character I'd been searching for all this time. Despite having the brawny physique and gladiatorial attire of the Sleuth from Outer Space, that callous spray of bullets and cruel grin lets you know B'rett would just as soon not get his hands dirty taking some poor soul out. I love the lighting over his muscles and the way the yellows contrast against the plum colored garments. In black and white, B'rett is just a Martian with a laser pistol, but nobody looks like this dude in color! Tex even whipped up an impromptu logo for B'rett on the spot, which I've happily made use of (plus I snuck the image into one of my fake covers from a Manhunter series that exists in a better world than ours.) Getting a work like this from Mark Texeira was one of my "grail" pieces, and I'll have that much easier a time going to my grave knowing I checked this particular box off my bucket list with a glorious commission that's the envy of my friends and among my very favorites!

Mark Texeira
Posted by Diabolu Frank at 12:00 AM