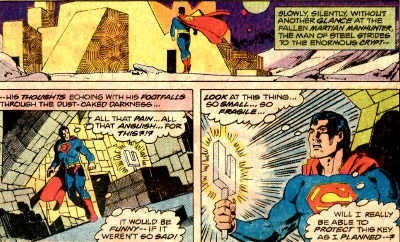 "A very precious key, carved from the most delicate crystal, and locked away in an isolated crypt!" The Crystal Key was created by the pacifistic Largas to safeguard Warworld from seeing use, secured as it was by its own awesome defenses. "Only the sonic vibrations of a certain Crystal Key would allow anyone to penetrate Warworld's protective screen-- and thus, they held the key in safekeeping!"

Placed under the sacred protection of J'Onn J'Onzz, the Crystal Key was hidden on the dead, utterly barren fifth planet from the sun of the star-system Cygnus, behind Mars II. The Crystal Key was housed in a solitary crypt, itself unlocked and devoid of automatic defenses. However, a proximity alert would notify the Martian Manhunter in the event of any arrivals within enough time for the Alien Atlas to speed a rocket to notify them that the planet was "off-limits-- to everyone!" Barring that, J'Onzz had defenses hidden, including missiles armed with kryptonite in the event of a Kryptonian attempt at theft.

With the help of Superman, Mongul defeated J'Onn J'Onzz and absconded with the Crystal Key. Reaching the region of space where Warworld was hidden, Mongul used it to bypass Warworld's defenses. Presumably, the Crystal Key was still on Warworld at the time of its destruction, but the key's definite fate has not been revealed.