The Death of Mongul 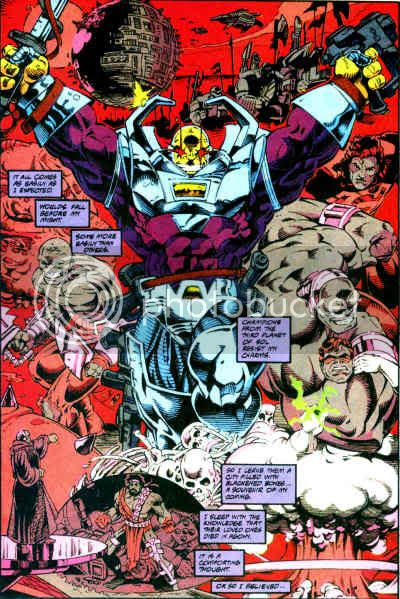 After devoting a month to the schemes of the Bronze Age Mongul, I hope readers retain an appreciation of the potential of the character as originally conceived. I've ended coverage in the Pre-Crisis era, but people who've followed DC Comics since 1987 are likely familiar with a different interpretation of Mongul than has been seen here. I'd like to offer a heavily editorialized rundown of the reworked Mongul.

Debuting in Adventures of Superman #454-455 (May-June 1989) and Action Comics Annual #2, the new Mongul was a conquering warrior of worlds. As revealed in Superman #32 (6/89,) "On each conquered world, the soldiers were interned and the literate put to death. The strongest of back and the weakest of mind became the slave labor of Mongul's empire... while the greatest warriors were transported to a desolate planetoid, there to fight to the death for the amusement of the emperor and his subjects." There were allusions made to this being the way of things for thousands of years. As re-conceived by Roger Stern, Jerry Ordway and George Pérez, Mongul was something of an extraterrestrial Caesar, and Warworld his traveling gladiatorial arena. Their take erased the memory of the Bronze Age Cube-Traps and Death Star, and has served as the basis for most interpretations since.

"You have vanquished my champion, slave! Now kill him and have the privilege of presenting to me his head!"

The now familiar story went that Superman was captured and sold into slavery, leading him to Warworld and victory against the champion Draaga. When Superman refused to kill the fallen fighter at Mongul's command, the emperor ripped off his robes to engage Superman directly. "He teleported here from Warworld instantaneously! But it must be thousands of miles away!" Mongul then began punching Superman, and trying to finish off Draaga. The Man of Steel held his own, considering he was at diminished power levels after weeks of space travel, but ultimately Mongul battered him unconscious. The conqueror suffered a heat vision-inflicted shoulder wound for his trouble.

"When your world of Krypton died, I was cheated of my right to conquer it! But this day, I shall claim the last Kryptonian!"

Fearing the "Krypton-Man" might shatter a blade if driven into him before the masses watching from afar, Mongul chose instead to have his guards carry the combatants away for secluded torture. Mongul taunted Superman by firing at the chained Draaga, prompting the Man of Tomorrow to melt Mongul's handgun. The flaxen fiend realized the heat vision could just as easily have crippled him, and clearly knew fear. Superman burst his bonds and attacked Mongul, whose chestpiece now fired destructive rays. The Kryptonian was forced to abandon his offensive to protect Draaga from a falling column, though he turned the debris against his fallow foe. Finally, Superman landed a series of blows that knocked Mongul out cold. Since Superman refused to kill even Mongul, an ancient cleric entrusted with the Kryptonian Eradicator teleported the Man of Steel to safety.

"You are strong... for your size. But I am stronger! And I, too, possess an inner fire! Dance, little one! Dance!"

These early reappearances were about the closest seen since to the original Mongul, and the gladiator angle helped set the character apart from contemporaries like Darkseid. However, I always saw Mongul as part-archeologist, part-gangster. Having already lost his empire before his first appearance, the original Mongul was clearly used to wielding power. He wasn't inclined to get his own hands dirty, so Mongul intimated others into working for his agenda. Mongul's motivation was always to restore his lost grandeur through new sources of power, and taking revenge on those who got in his way. Despite this, the original Mongul was calculating, would abandon failed plots as a pragmatist, and was already possessed of awesome might that humbled the Pre-Crisis Superman on multiple occasions. The Post-Crisis Mongul comes off somewhat cowardly and too quick to anger. Replacing the Cube-Traps with generic laser beams meant the sacrifice of a recurring story element in favor of blunt violence. It was very clear this new Mongul took everything personally, and his overreactions were an Achilles Heel. Finally, by having Mongul beaten by a clearly depowered Superman, the door was closed to his ever being a serious threat in the future, at least in terms of raw force. Mongul may have been back, but he was also spayed.

"Mongul still stands! What good is your quickness now, speedster? ...What the--? RAAAARGH! Stand still, damn you!"

Mongul didn't return until the summer of 1993, where he had been humbled to the point of kissing the ring of the Cyborg Superman during "Reign of the Supermen!" The pair of villains destroyed Coast City and began to convert it into a giant engine for a new Warworld. Mongul was eventually defeated and incarcerated by Green Lantern Hal Jordan. There's a sharp contrast between Gerard Jones' use of Mongul in Green Lantern #46 (10/93,) where he was at least a major foil for the seasoned Jordan, and Ron Marz's in GL #51-53 (5-7/94,) where Superman aides the neophyte Kyle Rayner in proving his mettle against Mongul. Like a common Flash villain, Mongul was thrown in the super-villain slammer. Little surprise he actually appeared in The Flash #102 (6/95,) to be soundly owned by a newly empowered Wally West also in need of strutting. Mongul had gone from a menace that could legitimately take on Superman, the Justice League and the Legion of Super-Heroes in one adventure to the punching bag of every kid hero on the block.

"No-- no more revenge. All I want is a chance to return to the life I knew. Raining terror and death on those too feeble to stand against me!"

Mongul's final stab at redemption was in a two-part story in Showcase '95 #7-8 (8-9/95) by Peter J. Tomasi, Scot Eaton and Pam Eklund. Taking his cues from the savage dream sequence from "For The Man Who Has Everything...", Tomasi recast Mongul as a homicidal maniac who slew his infant brother on the off-chance the boy might oppose him at some future date. In the present, Mongul was held in a space station prison, assaulted by virtual reality manifestations of his foes and failings. Mongul appeared to be completely passive under this conditioning, but the day a mass of additional prisoners arrived, Mongul went on a gory premeditated rampage. Ever the loner, Mongul even dumped his fellow convicts into the vacuum of space while making his getaway in a small craft. When the vessel failed, Mongul impotently smashed equipment as he began falling into a sun. However, benevolent pink-skinned aliens rescued him at the last moment, and were rewarded with rape and murder on a planetary scale. Mongul delighted at killing with his chest laser and working his new slaves to death erecting statues in his honor. The yellow beast showed a new found masochism, or at least was willing to accept pain as part of the exhilaration of battle, if only when against opponents he knows could be crushed at will.

"Ah, finally, some backbone! Yes! Yes! Let your anger loose... Take vengeance on the one who has crushed your people and stolen your dreams! Show me your hatred! Let me feel your pain!"

While a mysterious virus ravaged the native population, Mongul commanded all the world's finest minds to construct for him a new Warworld. The merciless menace also introduced a new arena game, in which his subjects were forced to dress as Hal Jordan, Kyle Rayner, the Flash, Superman and Steel. Any who resented this atrocity were simply blasted to smithereens with Mongul's laser. Mongul ignored the virus for as long as he could, then took steps to contain it too late. The germ had been unknowingly brought by Mongul himself, and unable to save even 1% of the populace, the scientists who found a cure destroyed it and committed suicide to escape his tyranny. All escape ships were destroyed, stranding Mongul on a world left dead by his actions. In the silence, Mongul was able to hear the cries of newborn infants. "A male and female. Sole survivors. A family resemblance. Immune, just like their father. Their mothers-- perhaps my chambermaids-- were not as fortunate." While the question was left in the reader's mind whether Mongul would exterminate his offspring as he did his brother, the disclosure served just as well as a contingency plan. Mark Waid, who had already sacrificed Mongul's credibility in that issue of the Flash, built up his new villain Neron by having him snap Mongul's neck in Underworld Unleashed#1 (11/95.) Mongul had refused an offer of power from the demon lord, and suffered the consequence.

"At first I thought it was snow. Every minute, every hour, the funeral pyres burn... and the ashes of the diseased dead cover the sun. The smell of burning flesh is sickening. The waste. The incredible waste."

In Superman #151-153 (12/99-2/00,) Jeph Loeb and Mike McKone reintroduced one of the twins as a full grown adult with daddy's taste in clothing and conniving. Superman turned Mongul Jr. over to Lobo, but he escaped to join his sister Mongal in being molested by Krypto the Super Dog. Mongul II appeared to die in "Our Worlds At War," but he was back to life the following year for the "Ending Battle" crossover. Junior joined Superman in "The Harvest" story, made a cameo appearance in "Infinite Crisis," and murdered Mongal after a two-parter against Green Lantern and Green Arrow. Mongul II is now a full-time Green Lantern Corps villain, as a leading member of the Sinestro Corps. Mongul Jr.'s primary writer is again Peter Tomasi, and as in the past, his stories tend to be exceedingly grisly and mean-spirited. This is clearly not your daddy's Mongul, and he has failed to be relevant to Martian Manhunter comics for years.
Posted by Diabolu Frank at 7:00 PM