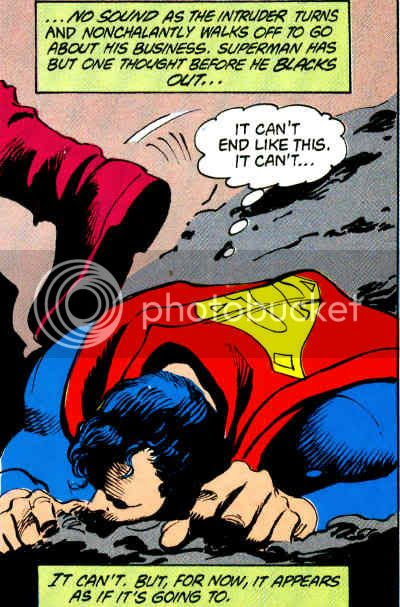 Floyd Perkins, Daily Planet copy boy, had been deposited on a floor of the building that shouldn't exist. Men in strange outfits held a meeting, and at the head of the table, a fellow who resembled Nosferatu demanded he leave. On the way out, Floyd ran into Humphrey Bogart.

Three miles away in Metropolis, a demonic entity rose out of a man's body to fight Superman. Someone sent the Man of Steel a mental message telling him the creature was vulnerable to low air pressure, which the Man of Steel produced. As Jimmy Olsen looked on, Groucho Marx stood beside him. The "demon" vanished, so the Last Son of Krypton took the man from which it was emitted to an iron lung in Gotham City. Clark Kent learned from Commissioner Gordon that the man was small time crook James Hoyt, presumed dead in 1967.

Superman flew to the JLA satellite, where Aquaman had abandoned monitor duty for parts unknown. Kal-El determined his was not the first recent "possession" through the ship's computer, and that the demonic releases were tied to phases of the moon. Traveling there, Superman spied a light coming from a crater, itself produced by a device of alien origin. "It's powered by solar energy... but not from our sun. I can feel that it's energy from a red star. It looks like it's some sort of relay device, taking in signals and sending them out again... towards Earth!" A figure walked up behind the Kryptonian, then fired a crimson ray that drained him of his energy. There was no sound as Superman collapsed in defeat. As for the unknown foe wearing purple boots, the intruder turned and nonchalantly walked off to go about his business.

Floyd Perkins and Jimmy Olsen compared notes, but could not relocate the hidden floor. They returned to the staff room, where they found Perry White arguing with a plainclothes Adam Strange about reaching Superman to protect a stone tablet. "In fact, the whole world needs it."

"Outbreak!" was by Mark Evanier, Gene Colan and Bob Smith.