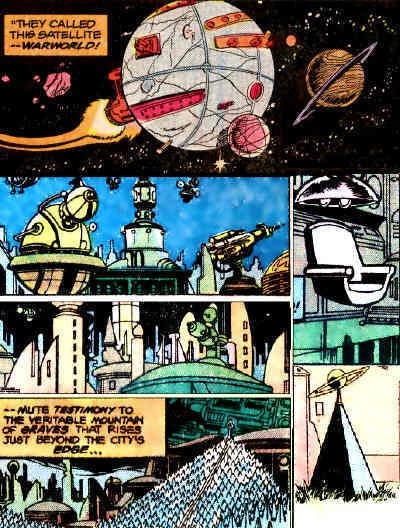 Per Superman, "An artificial satellite-- designed by the blood-thirsty Warzoon!" Warworld was intended to be powerful enough to make the warrior race masters of the cosmos. According to J'Onn J'Onzz, "Nuclear missiles several miles high dotted the satellite's surface, flanked by macro-laser cannons capable of incinerating entire worlds... Monstrous [nuclear] engines made the satellite mobile, allowing it to traverse space at incalculable speeds..." However, all the Warzoon died mysteriously before Warworld could be fully employed.

"The Largas-- A race that was the very antithesis of the blood-thirsty Warzoon-- found the last of the Warzoon war-chiefs slumped dead at the satellite's controls... Unfortunately, the ultra-peaceful Largas could not bring themselves to destroy Warworld, despite the overwhelming threat it posed-- so they did the next best thing... They reprogrammed the satellite's defenses to prevent anyone from setting foot on Warworld ever again..." Access could only be gained via the Crystal Key.

In one instance, Warworld was found to be larger than a white dwarf star, and passed its usually overwhelming gravitational pull without any sign of being effected. Supergirl and Superman further beheld "an armored landscape studded with instruments of war-- all controlled by a vast computer system that forms the artificial planet's core! On the surface, the sprawling city that was once home to the hostile Warzoon race that built the planet lies empty-- mute testimony to the veritable mountain of graves that rises just beyond the city's edge... Finally, the telescopic gazes come to rest on the gleaming command console from which all of Warworld can be controlled..."

Warworld had an automated alarm system to alert its masters of a breach in its defense perimeter. While Warworld was programmed to defend itself, it could also be commanded from a modest pilot chair, above which hovered a Control Helmet enabling psychic rapport with the vessel. From this Command Console, the pilot's perceptions could then be expanded by half a galaxy to analyze a potential threat and assign response. For example, Warwold's city-sized missiles held the potential to kill the Pre-Crisis Man of Steel himself, and Mongul proclaimed them "the least of Warworld's weaponry." However, the massive energy-drain on the pilot's mind caused cerebral hemorrhage in even the sturdiest individuals. It was the Control Helmet's insatiable demand that killed every Warzoon in turn, and caused Mongul to collapse under its strain during his brief reign over the world.

The original Warworld was destroyed when Supergirl flew through the false planet at speeds exceeding light. Though the satellite's powers of self-preservation allowed it to begin automatically repairing the damage, it was not fast enough to prevent Superman from reaching and reprogramming Warworld's computers. With Warworld's own defense-systems directed in on itself, the satellite was swiftly destroyed, nary the slightest trace remaining.