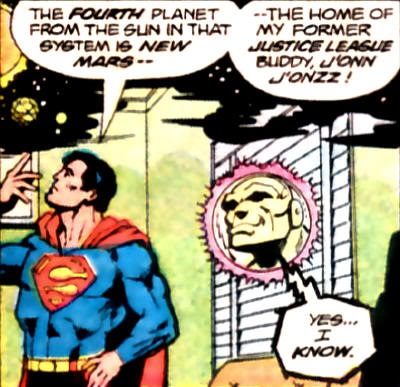 In a flash of pink smoke and energy emissions, a crystal ball containing the holographic head of a jaundiced alien appeared in the usually quiet third-floor apartment of Clark Kent. "So, Superman-- at last we meet! It is a moment I have long been awaiting! ...I am called Mongul... I am acutely aware of your vaunted super-powers, Kryptonian-- Thus I am transmitting this message to you from the safety of my ship via scrambled signal-- A signal even you cannot possibly hope to trace! I have come to you, Superman, because I have need of you-- to retrieve an item which by rights belongs to me! ...I am not asking you-- I am ordering you! You will do as I command-- or my three diminutive 'guests' will suffer the consequences! I do trust you recognize them--?

Inside Mongul's Cube-Trap were Superman's Girl Friend Lois Lane, Superman's Pal Jimmy Olsen and Superman's Flash Thompson, Steve Lombard. In exchange for the safe return of Superman's supporting cast, Mongul demanded the retrieval of the Crystal Key, hidden one planet back from "New Mars-- the home of my former Justice League buddy, J'onn J'onzz!" With a grin, Mongul noted, "Yes... I know."

"As the Man of Steel hurls himself effortlessly into the star-dappled void," he was trailed by Mongul's communication sphere. "I don't much like that-- but... I can't risk antagonizing this mysterious Mongul until I know more about him." Superman had no intention of giving Mongul the Crystal Key, but instead was stalling for time until he could strike to save his friends. "It'll be dangerous... extraordinarily tricky! But that's why they call me Superman, right? If I can't pull it off, who can? 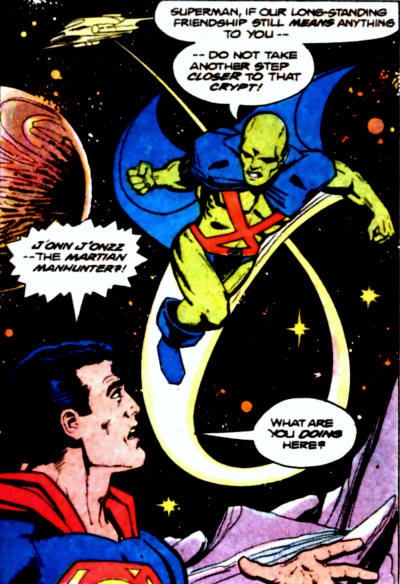 The Man of Tomorrow set off a proximity alarm which alerted the Manhunter from Mars, who sped to the solitary crypt that housed the Crystal Key in his space craft. Just as Kal-El wondered what could have kept Mongul from raiding the seemingly defenseless crypt himself, the green-skinned answer exited his ship in order to ward him off. "Superman, if our long-standing friendship still means anything to you-- do not take another step closer to that crypt!" Setting foot beside the Kryptonian, J'Onn J'Onzz asked, "The question, my friend, is what are you doing here? This planet is off-limits-- to everyone!"

"Sorry, J'Onn-- didn't mean to trespass! I'll just collect what I came for-- and be on my way!"
"You don't mean the key--?!"
"What else? The lives of my friends depend on my getting it!"
"And the lives of worlds beyond numbering depend on it remaining here!"
"I was afraid of that! Look, J'Onn-- maybe you'd better tell me exactly what this is all about!"
"Gladly, my friend-- if it will bring you to your senses!"

The Martian Marvel explained about how the extinct Warzoon warrior race had created their ultimate weapon Warworld, and how it was secured by the Largas with the Crystal Key, which had been placed in his sacred trust. "Now do you see why you cannot have that key, my friend? It is perhaps the single most dangerous object in the universe-- and I am sworn to protect it!" 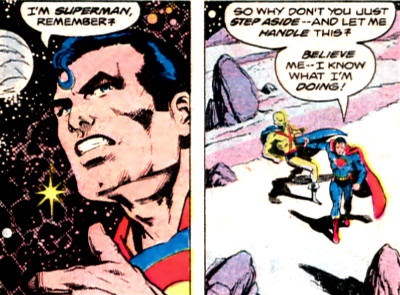 "I understand your position, J'Onn and I sympathize! But don't forget whom you're talking to here! I'm Superman, remember? So why don't you step aside-- and let me handle this? Believe me-- I know what I'm doing!" Dismissed and callously handled, J'Onzz J'Onzz had all he could stand. "I really wish I could believe you, my brash Kryptonian friend-- but unfortunately, I can't!"

The Alien Atlas struck the Last Son of Krypton with a punch that sent him flying tail over teakettle, followed by another that bored the Man of Steel through stone. The Mother-lovin' Manhunter from Mars then kicked Lara Lor-Van's boy through more rocks, leaving him on his knees. "I gave you fair warning, Superman-- a good deal more warning than I would have given anyone else! I did so because you were my friend-- but the bonds of friendship can only be stretched so far before they break!"

As the Manhunter dove in for the kill, Big Blue swung behind with a wicked backhand that floored him. "Now please, J'Onn-- give it up! You know you're no match for me!" Manhunter admitted as much, but noted Superman's approach was detected far enough in advance of his arrival that special precautions could be taken. "...I regret with all my heart that you've forced me to use them!" 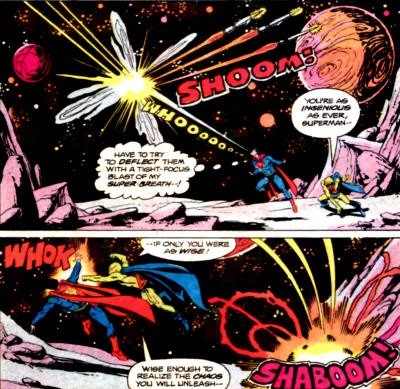 With the plunge of a palmed trigger, miniature missiles armed with Kryptonite warheads launched in the distance. In what had to be a conscious act of superdickery, Super-Breath deflected the missiles before they reached their target. Probably as much for Superman's deploying J'Onn J'Onzz's trademark Silver Age Justice League of America superpower as for that Crystal Key business, Manhunter slugged Kal-El again. J'Onzz kept trying to convince Superman to relent, both with words and fists, but to no avail. The Man of Steel caught the Martian Marvel's knuckles in one hand, then encircled the immediate area with heat vision, which ignited "the carbon-laden ground around us..."

"N-no... can't succumb... can't surrender..."
"Listen to him! The man's a hero in the truest sense of the word-- which just makes me regret having to do this all the more!"

Superman buried Martian Manhunter into the earth with a super punch. "I'm sorry about this, J'Onn-- you'll never really know how sorry! Now please-- for both our sakes-- just lie there till I'm gone!" 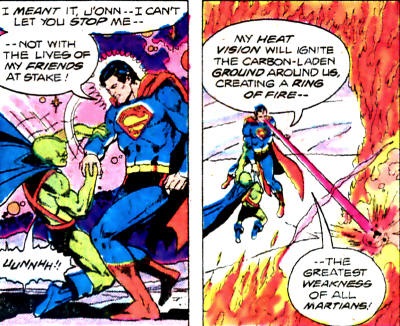 The Man of Tomorrow then claimed the Crystal Key, with only a vague notion of how he was going to keep it from Mongul while saving his friends, mostly revolving around his arrogance. "It won't be easy... but that's why they call me-- Superman?!?" It was shaken, however, when a space vessel the size of a small city appeared, from which Mongul arrived by beam. "Yes, it is rather impressive, isn't it?" Mongul wanted none of Superman's swagger-- only the key, which he was refused. "Please, spare me your so-called humor, Superman... We had a deal, Kryptonian, and you will honor it-- or I will crush your three hapless friends with a single gesture!"

Superman would kill his friends instantly if he struck at the controls to Mongul's Cube-Trap with his heat vision, but even in the face of death, the trio pleaded for Superman not to give up the key. They called Mongul "a monster-- totally soulless," and stated "He intends to enslave the stars!" 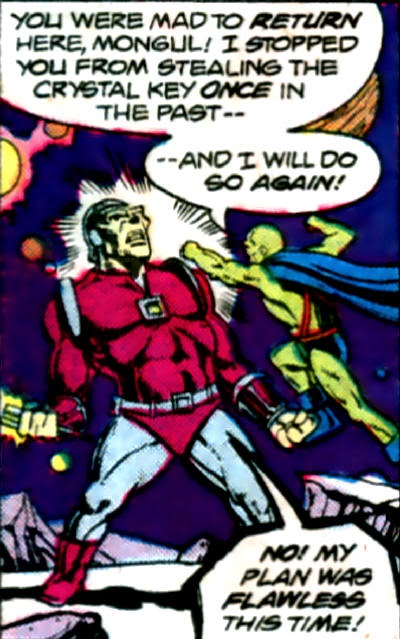 "The malevolent alien's stubby finger brushes a button on his chest," and Superman's friends suddenly got a whole lot closer. "I will ask you this for the last time, Kryptonian-- give me the key!" Though awash with great sadness, the Man of Steel could not ignore his friends' steadfast conviction to perish for the sake of the universe. However, just as Mongul reached for the chest panel button that would doom Lois, Jimmy and Steve, the cube-controls shattered before him. "Curse you, Kryptonian-- you've freed them!" As the trio of Superfriends thanked their presumed savior, Mongul blasted Kal-El with eye beams. The jaundiced giant then seized the Crystal Key, but a voice rang out from a suddenly materializing figure.

"Superman spoke true, Mongul! He didn't free your captives-- I did!" Mongul cursed, "J'ONN J'ONZZ?!?" As the Alien Atlas launched his fist at the merciless one, he observed "You were mad to return here, Mongul! I stopped you from stealing the Crystal Key once in the past-- and I will do it again!" Mongul protested with a left hook that left the Martian Manhunter reeling. "No! My plan was flawless this time! The Kryptonian was the perfect champion-- the one opponent guaranteed to defeat you! Admit your defeat, curse you-- and get out of my way!" Superman leapt back into the fray. "You're not going anywhere with that key, Mongul!" The malevolent alien's last words were "Aren't I?" Mongul and his ship then vanished without a trace. 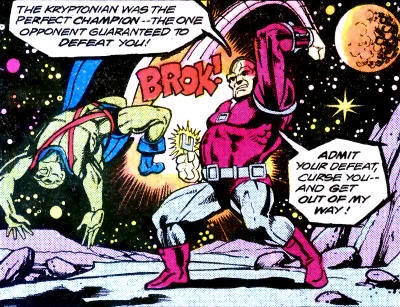 "Is this how you intended to 'handle' Mongul, my friend?"
"Forgive me, J'Onn... Looks like I failed you!"
"No, not me, Superman-- It's the entire universe that will pay the price of your failure! I warned you that you were dealing with forces beyond your comprehension-- but you were too overconfident-- too egotistical-- to listen!"
"I--I thought I could deal with it! After all... I'm Superman... aren't I?"
"Super or not, you're still a man-- and men are fallible! Now, because of you, Mongul has the key that can unlock chaos-- and I demand to know what you intend to do about it!"

"First, J'Onn-- I'm going to construct a protective bubble, and return my three friend to Earth!"
"Is that all--?"
"That's just the beginning! Next, I intend to hunt up some heavy duty super-help! And then, I'm going to track down Mongul, no matter where in the universe he may be hiding-- and recover the Crystal Key... or die trying!"

"The Key That Unlocked Chaos!" was by Len Wein, Jim Starlin & "Quickdraw." Follow the link to read about this issue's back-up feature, "Whatever Happened To Congorilla?"
Posted by Diabolu Frank at 9:00 PM

Can I smack him now?

Please-- PLEASE-- PLEASE DO! Superdickery to infinity and beyond!