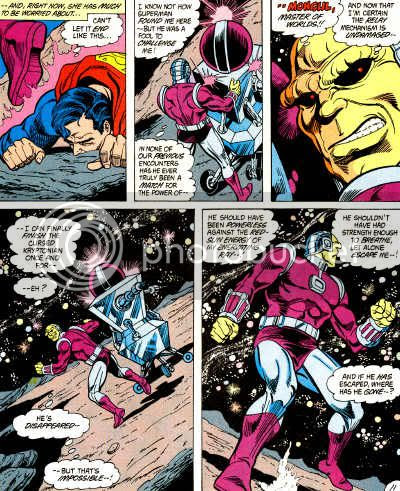 On the moon, Kal-El's merciless foe returned to his device. "I know not how Superman found me here-- but he was a fool to challenge me! In none of our previous encounters has he ever truly been a match for the power of-- Mongul, Master of Worlds!! And now that I'm certain the relay mechanism is undamaged-- I can finally finishe the cursed Kryptonian once and for-- eh? He's disappeared-- but that's impossible--! He should have been powerless against the red-sun energy of my Enervating Ray--! He shouldn't have had strength enough to breathe, let alone escape me--! And if he has escaped, where has he gone--?" The Man of Steel had used the last of his heat vision to burrow into the moon rock, then leaped out to punch Mongul! Superman again decked Mongul, sending his flying into his relay device. The resultant explosion seemed to obliterate master and machine. Little trace was left for Superman, except some sort of writing that materialized at the center of the bomb crater. "Great Krypton! It can't be--! I know that symbol-- but the one to whom it belongs is dead!"

In the Sahara Desert, a robed figure wandered the wasteland. At the sight of water, Aquaman cast off his protective garb, only to be crushed by the realization it was just a mirage. Delirious, the Sea King collapsed into the sand, vultures circling overhead.

"Blinded By The Light" was by Len Wein, Chuck Patton and Mike DeCarlo.