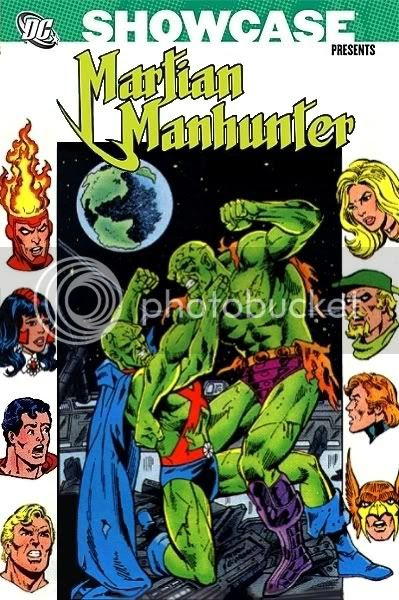 By the end of today, especially with our recently elevated hits from this Blackest Night business, the Idol-Head of Diabolu blog will reach 100,000 page views. I'd like to thank everyone for coming, especially those who visit daily, even when I myself don't and fail to post anything. That's also 5-10 times the total hits over the life of my old Martian Manhunter: The Rock of the JLA site, which tells me either the Justice League cartoon/Smallville were really good to J'Onn, or the format switch was a very good idea.

All this considered, I'd like to introduce the blog and myself to the newer readers. I currently go by the alias "Frank Lee Delano," though it's far from my first, and likely not the last. I've enjoyed Martian Manhunter since the mid-1980s, but not obsessively until the tail end of the '90s. It just so happened I was first getting into the internet at that time, and feeling there wasn't enough representation for the awesomeness that is J'Onn J'Onzz, I took matters into my own hands. I built one of his first and largest "shrines" to the character, and after a five year hiatus, I revisited the Manhunter from Mars with this blog-- now 1 3/4 years and very nearly 700 posts in.

The Rock of the JLA, as evidenced by the title, heavily favored "modern age" material from 1984-1999. That was my area of expertise and interest, though I felt driven to investigate older work. My first reaction to the Silver Age stories was revulsion, and so I openly ridiculed them. Some of the earlier posts from this blog reprinted my sarcastic and comparatively brief coverage from the old site, as can be seen here, here, here, here, here, and here. My coverage has become more respectful, not because the stories suddenly improved, but because this blog has been geared more toward detailed reference than soapbox ranting. Also, I found better Silver Age stories as I dug deeper, and became more endeared to the strip's eccentricities besides. The old blog also offered more message board-type fodder, like looks at his greatest fights with other heroes, characters who were knock-offs of the Manhunter, and so on. Where the old site offered sweeping historical overviews, this blog has been more concerned with the minutia of each given comic. The Idol-Head has also focused on the more obscure and older comics because I worked under the assumption everyone had already read most of his appearances in the Justice League International and JLA years.

Anyway, I'm now looking to the future of the blog. Changing circumstances in my life forced me to rely very heavily on quick posts, usually pin-ups and the like, which are readily available elsewhere through Google images searches, Comic Art Fans or Comic Art Community. On the plus side, this allows me to insure there's a central, sustained, and expanding Martian Manhunter internet archive... but still, lame on my part. I'm working on my time management skills to do better by the blog. I rarely get direct comments on what folks want out of this place, but your answers to current and future polls look to be a big help. Later in the week, I'll go into greater detail on what's coming up around here.

What I will say is that I've heard the demand for more modern coverage, and will work to satisfy it. Summer of Saturn will return. Gypsy and DEO Agent Cameron Chase will follow. Ostrander/Mandrake will be better represented. I will be stepping up my additions to The Vile Menagerie considerably. I'll update my indexes again. I'm also going to try to loosen up more, and remember there were fun things about the Rock that could serve well here. It'll be a long road to 1,000,000 hits, but I'll do my best to take the Idol-Head of Diabolu there and in style...
Posted by Diabolu Frank at 7:15 PM

As a loyal MM fant, ss long as this blog keeps going, in any form, I'll be happy. I like the opinion posts and the story summaries the best...I've discovered a few older stories that I missed out on because of this blog. I hope you can cover the Silver Age more in the future...when I first started reading Silver Age comics I thought they were too silly and lighthearted, but now they've grown on me and I think comics today have gone a little far in the opposite direction.

I'm glad you enjoy the blog, LissBirds. I'm not going to have as many story synopses soon as I used to, but more than I've had in the last few months. I was surprised how op/ed has done in the poll, so there will be more to come. I'm definately going to revise the Silver Age posts linked in the article, and I full intend to gear up new posts for that period. Like you, I had to warm to DC's Silver Age, though outside Manhunter and a few others, I'm still pretty unforgiving. The Bronze and pre-2000 Modern Age remain my reading sweet spot. As for the darkening DC, I loved that kind of thing in the savage satire of book like Marshal Law back in the '80s, so I can't take any of it seriously. Beyond repulsion at so much of the current misanthropic idiocy going down these days, it just seems to be overplaying a very old joke.

Frank - Congrats on reaching 100,000 page views! That's fantastic! It's a real testament to the hard work you put into this blog.

In regard to feedback, my favorite era of Martian Manhunter is probably the 1980s & 1990s material. From the dissolution of the original JLA, through Detroit, through JLI, and into Morrison's JLA. Even though Martian Manhunter was very different from the beginning to the end of that timeframe, it's still my comfort zone.

In regard to types of posts, I typically prefer commentary/opinion, as well as graphic posts. I have the attention span of a mayfly, so I typically gravitate towards the shorter posts. Just my style.

Regardless, congrats again and keep up the fantastic work!

I will always be grateful to this blog for introducing me to the Martian Manhunter: American Secrets mini-series. After reading your synopses I bought the back-issues. Not only the best MM story ever (of course), but one of the best DC super-hero books, period.

And thanks for posting my mock-up!

I Loooove American Secrets, as well as the Chuck Patton cover you repurposed, Tom!

Well I can honestly say the blog is the highlight of my work day many a slow library moment! I don't always get to check and don;t always get to comment, but I always come back to see whats up! Bravo Frank, and congads!