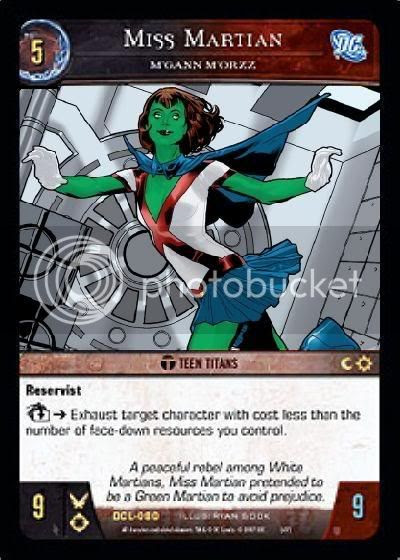 The last collectible card game I played was Overpower in the '90s, the shortest bus of the genre, so I can't tell you much about this modern, new fangled, complicated thingamajig. According to a few resources I dug up on the intarnets, the card works like this:

exhaust target character with cost less than the number of face-down resources you control.

A peaceful rebel among White Martians, Miss Martian pretended to be a Green Martian to avoid prejudice.

The card is apparently rare, though it can be easily purchased for just a few bucks online. It was lovingly rendered by Ryan Sook, who includes several version of the piece on his site, including preliminary, uncolored, and finished versions.
Posted by Diabolu Frank at 9:00 PM

I will not agree on it. I assume warm-hearted post. Specially the title attracted me to be familiar with the intact story.