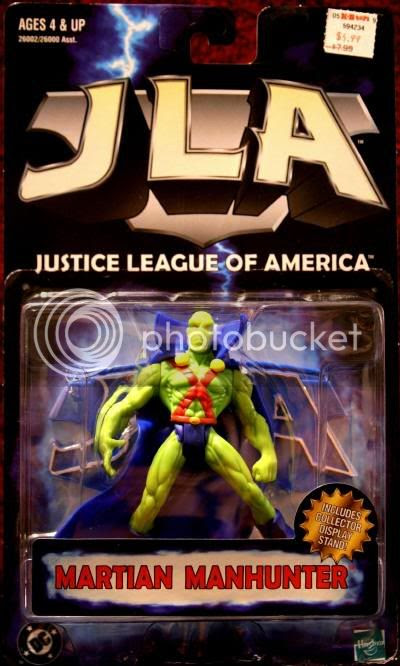 After Martian Manhunter debuted in action figure form as part of the second series of Kenner's Super Powers Collection in 1985, he went on a thirteen year hiatus from toy shelves. Though Kenner planned to use him in their Batman: Total Justice line, as witnessed by his appearance in the 1997 Dollar General Total Justice Jumbo Coloring & Activity Book, the figure remained unproduced after the third and final assortment shipped. However, Kenner's parent company Hasbro felt there was still life in the line, and repackaged the Total Justice figures under the "JLA" banner, with new packaging and repaints. These were made exclusively for KB Toys and Diamond Comic Distributors, and obviously targeted the collectors market. "JLA" shed the kid-centric "fractal tech gear" accessories and focused on niche figures like our man Jones.

Each figure came with a plastic base sculpted into the "JLA" logo with a slat on the back. You could then cut out a spotlight cover image for the character printed on the back of the blister card packaging to create the advertised "COLLECTOR DISPLAY!" The line also featured the first action figure appearances of Superman Red/Superman Blue, the modern Superboy, Impulse, Zauriel, and the Atom. Steel and Wonder Woman, featured with Martian Manhunter in the Total Justice coloring book, finally joined the line, alongside Plastic Man and Red Tornado. New versions of TJ figures Green Lantern Kyle Rayner, Superman, Batman (with and without a face mask,) Robin, and Green Arrow were also included, as well as others in boxed sets 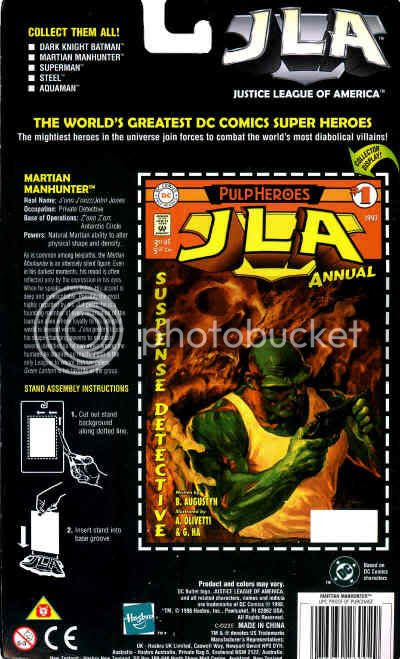 As is common amongst telepaths, the Martian Manhunter is an intensely silent figure. Even in his darkest moments, his mood is often reflected only by the expression in his eyes. When he speaks, others listen. His accent is deep and indescribable. Possibly the most highly regarded by his JLA peers, he is a founding member of every incarnation of the team, an alien whose loyalty to his adopted world is beyond words. J'onn prefers to use his shape-changing powers to maintain several identities so he can move among the humans he admires so much. J'onn is the only Leaguer to whom Batman defers. Green Lantern is his favorite of the group.

Though this "JLA" figure became a bargain bin favorite at K*B Toys, the floodgates on Martian Manhunter toys opened in the late '90s, and continue to the present. Thanks to the popularity of the JLA comic book series and a line devoted to the Justice League cartoon, the Martian Manhunter has become one of the most commonly produced DC Comics super-hero action figures.
Posted by Diabolu Frank at 11:59 PM

I've always loved this particular line of action figures, for one reason or another--it was great to have the full JLA roster on the shelf--and the J'onn J'onzz figure was a key part of that. Could he look any more majestic in that cape?

I like this sculpt, especially the legs. Really cool.

I dug Total Justice as well. The sculpting style worked better for some than others, and they never stood very well, but they were certainly dynamic and diverse.

I have the TJ Flash, which is nicely sculpted, but seems more intent on falling flat on his face than any other Flash toy I have ever seen. This Manhunter is badass, though... right up there with Black Lightning.

It's a nice figure, but his cartoonishly overextended frown costs it a lot of points. Black Lightning is the greatest TJ figure! None challenge its superiority!

Black Lightning may be cool, but the TJ Hawkman is everything badass about the 1990s Hawkman without the convoluted storyline.