2007 Michael Netzer "The Idol-Head Of Diabolu, A Blog For J'Onn J'Onzz" Banner 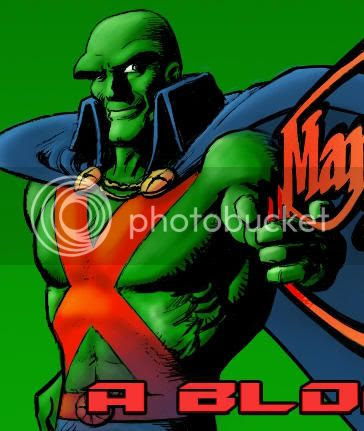 Since I've fallen behind on daily blogging, I thought I would treat this as an opportunity to do a belated multi-part series on artist Michael Netzer's campaign to "save" the Martian Manhunter from his then-rumored and later realized comic book death during the Final Crisis mini-series.

My brief involvement with Mr. Netzer began on late 2007 when I mistakenly attributed art from a 1986 DC Comics Subscription Ad to him, and he left a comment to correct the error. That pretty much made my day. I also mentioned a nifty anecdote from his days as "Mike Nasser" found in Bryan Talbot's fun book of creator unmentionables, The Naked Artist: Comic Book Legends (2007). That's when Mr. Netzer hit me with the real bombshell: this gorgeous, digitally rendered banner for my blog, which I gushed about at length here.

I held off debuting the banner until January of '08, where at mid-month the rumors began to circulate that Martian Manhunter and Aquaman's heads may be on the chopping block. Mr. Netzer and I began to correspond on the matter, at which time the artist shared with me details of his campaign to get DC Comics to "Take Me... But Don't Kill J'Onn." I suggested he use blogs to help spread his message, including those of a few friends of mine...
Posted by Diabolu Frank at 5:00 PM

You're a lucky man, Frank. You've got the best superhero blog banner on the net, there's no question about that! It is, as you say, absolutely gorgeous.