2007 Unpublished Batman and the Outsiders Promo Page by Ryan Sook 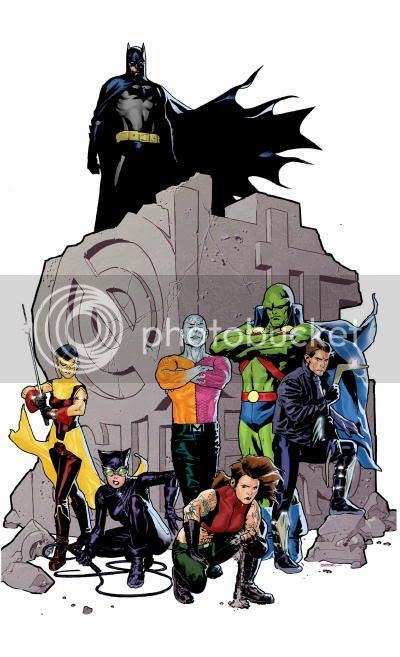 While the Outsiders series was being revamped into a Batman & the Outsiders relaunch, there was a lot of mystery surrounding who would stand as the actual line-up of the group. A series of one-shot specials was released pairing current Outsiders with their potential replacements, including Black Lightning's retconned adult daughter Thunder and the Brave New World Conehead Skrull take on the Martian Manhunter. Curiously, the artist of the promotional piece which seemed intended to reveal the new team, Ryan Sook, failed to get the memo on the J'Onn J'Onzz redesign, and drew him old school here. Nice as it is to see his take on "my" Manhunter, the Alien Atlas certainly looked out of place in this crowd. Not to worry, as the image would be altered twice over again to reflect sweeping changes in the project.
Posted by Diabolu Frank at 11:59 PM

I loved the modern redesign they provided Metamorpho during this series. The image of the classic costume was maintained with just a few minor stylistic tweaks. It looks great!