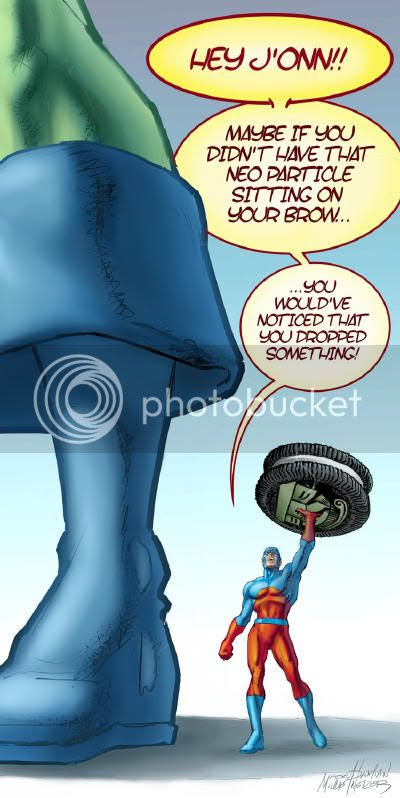 Michael Netzer continued his Martian Manhunter crusade, while I helped/hurt the cause by beginning a satirical series on this blog called "What Would Michael Netzer Do?" The point was to show that, regardless of whether J'Onn J'Onzz lived or even if Netzer drew him, they would still be handicapped by DC's horrible editorial dictates and generally poor writing in recent years. I labored over a Garth Ennis edition that never came into being, but you can still get a chuckle out of my repurposing '70s Netzer art with recontextualized dialogue by Frank Miller and Judd Winick.

In the midst of my buffoonery, Netzer answered both mine and Damian Maffei of the Atom: The Tiny Titan Blog's wishes to see J'Onn paired with the Silver Age Atom, Ray Palmer. While new incarnation Ryan Choi rode high, here was Palmer at the Manhunter's cavalier-booted feet. "Hey J'onn!! Maybe if you didn't have that neo particle sitting on your brow... you would've noticed you dropped something!" An Oreo? A Choco? No-- a new sandwich cookie chock full of Diabolic flavor! You can read more about it here.
Posted by Diabolu Frank at 6:15 PM

Awwww...epic cuteness. The Atom really is the cutest superhero IMO. And I'm glad there was a campaign out there to save J'onn, even if it didn't work.