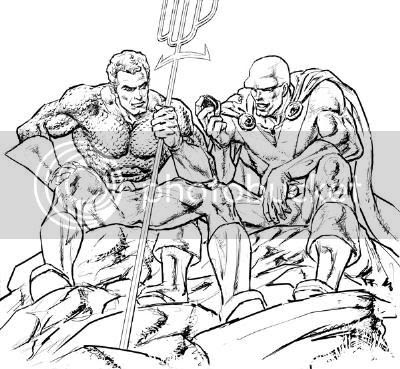 Like the Atom, I'm a big fan of Aquaman, and have long felt the deep but too-rarely touched upon friendship between the Sea King and Manhunter from Mars should be further explored. I covered finer details on one of this blog's very first posts here, and dwelt on it a bit more around the time the above image was making the rounds here. Now of course, this was produced by Michael Netzer as part of his Save J'onn campaign, which included the initial plea "Take Me... But Don't Kill J'Onn," the Ryan Choi and Ray Palmer pieces for Atom: The Tiny Titan Blog, and this final devotional for Rob Kelly's Aquaman Shrine. What's interesting though is that Mr. Netzer sent me a copy of the piece in production, and the initial intention seemed to me to be a quiet moment between J'Onn and Arthur alone. However, when the artist made the sketch public here, it included the Atom. Also, the line work here is fairly detailed for a sketch, while the finished piece was heavily altered to give it a painted look. I suspect this was at first going to be just for the Aquaman Shrine, but was instead converted into a more all-inclusive, labor-intensive denouement for Netzer's internet crusade. Whether (preferably) with or (as here) without the Atom, this was my favorite offering from that campaign.
Posted by Diabolu Frank at 8:00 PM