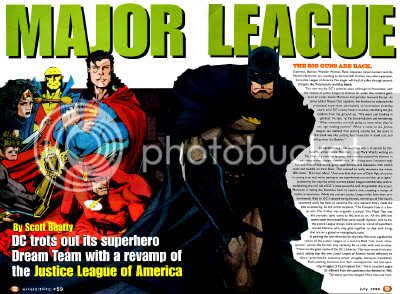 In this article, Wizard covered the return of the "Magnificent Seven" founders that launched the JLA series by Grant Morrison and Howard Porter. "No longer will the JLA suffer through second-stringers like Metamorpho and Blue Beetle." Editor Ruben Diaz explained the thinking that "When it came to the Justice League, we realized that putting anyone but the icons in the book was like putting four musicians in bowl cuts and calling them the Beatles."

Grant Morrison noted the influence of Mark Waid's work on The Flash and his desire to move away from the '80s "Dark Age of comics" in his belief that it was time to take the League back to basics. "The Fantastic Four is a family unit. The X-Men was originally a school. The Metal Men was the periodic table come to life, and so on. All the different teams seem to proceed from some specific dynamic. And to me, the Justice League always came across as a kind of superhero United Nations who gets together to deal with things that are on a global or intergalactic scale."

Obviously, the League members of the Gardner Fox years had changed considerably over 37 years, and so too must the modern team. Morrison wished to move away from Kennedy-era optimism and focus on the iconic Leaguers tackling millennial anxiety given various nefarious forms. "And the Justice League, to me, has a slightly creepy element in the idea of these fantastic godlike beings sitting in a fortress and watching the world." This opened up comparison to Watchmen, but Morrison explained that where Alan Moore humanized super-heroes, he saw the JLA as "the pantheon of gods in the DC universe." Morrison hoped to incorporate the more daring aspects of the earliest League stories with elements of Giffen/DeMatteis humor.

On the art front, Howard Porter was tapped after a run on The Ray, as well as the Underworld Unleashed and Amalgam projects. Editor Ruben Diaz said, "If there's any one accomplishment that I can be happy about, that would be bringing Howard into comics. Hopefully, people will see how great we think he is." Porter was joined by his JLX inker, John Dell.

Though starting with the seven JLA founders, Morrison promised an expansion to 12 within the first year, as well as ditching the League's former base on Overmaster's spaceship for new digs. Among the returning members Morrison expected were Green Arrow and Black Canary. Morrison had also wanted to work with Plastic Man since he was a kid, intent on updating him with a Jim Carrey/Ace Ventura personality.

As for villains, Diaz pointed out that the League's rogues gallery left something to be desired, and anticipated fresh takes on Starro, the Shaggy Man, Kanjar Ro, Professor Ivo, and T.O. Morrow. Tomorrow Woman would be an original creation, while Morrison also referenced Starbreaker, Darkseid and Despero.

Diaz recognized that with the exception of Martian Manhunter, few permanent changes could impact the individual members, but Morrison was certain he had big enough ideas and maneuvers to work around continuity issues. "I just know that this is going to work... In the end, these are the world's greatest superheroes, and it's as simple as that. It has to be the world's greatest comic book."

There was also a sidebar called "First Impressions" where Morrison offered his take on each member of the new JLA line-up. Of Martian Manhunter, he said "The noble tribesman of a tribe that's long gone. I see him much like an ancient Indian warrior-- real wisdom and battle craft. And because everyone recognizes that he's been in every incarnation of the Justice League, he knows more about this team than anyone else."
Posted by Diabolu Frank at 11:59 PM

I remember this article! And I remember saying to myself "DC will stick with this for a year and then drop it." Looks like ljacone was wrong on that one...