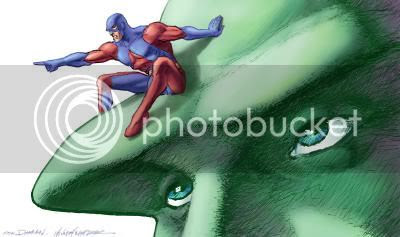 So Michael Netzer was trying to save Martian Manhunter through the internet, and I suggested some blogs that might help him get his message out. I had been a fan of the Ray Palmer incarnation of the Atom for years, and was delighted when Damian Maffei began his Atom: The Tiny Titan Blog. To my knowledge, this was the next blog to receive a piece of original digital Michael Netzer art after mine as part of the awareness campaign, and it was a sight. Obviously, using J'Onn's brow as a pier for the latest Atom was inspired, though I couldn't see the Asian Ryan Choi in this rendition. For the most part, it looked like Ray Palmer in an alternate costume, and as that's my favorite Atom, I can say as I minded. I went into greater detail on the matter here
Posted by Diabolu Frank at 5:45 PM