Which section of the Idol-Head of Diabolu blog's coverage do you value the most? 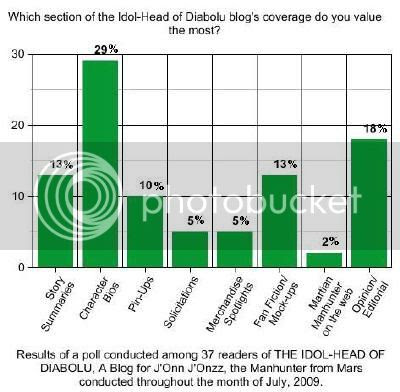 Perhaps I should have run this poll as multiple answer, because some of the results really surprised me, and I'm not entirely sure what to make of it. I expected character biographies to do well, and at over twice the votes of any other option save one, I need to make them more of a priority.

I added Opinion/Editorial at the last minute to fill up space, and it took the second spot, much to my shock. I'd previously assumed my blatherings were at best tolerated while folks waited for informational posts. I could probably stand to do more to engage readers in discussion, since comments on a given post never break double digits, and often even single digits. I'd been using pin-ups as filler when I'm too tired/disinterested/backed-up to offer a substantial post, but given their poor showing, I imagine I'll just offer up Op/Ed instead. Besides, I really need to get all those random pictures organized and under a button.

I'd always considered story summaries the real meat of the site, so of course they take up the most time and energy. They tied for third with fan fiction/mock-ups, which I again thought were at best humored by readers who hardly ever comment on my fake issues of Manhunter from Mars, of which I haven't made an offering since March. There isn't even a button! Then again, my April Fool's Bloodwynd mini-series announcement! consistently brings readers to this page via Google searches, so maybe my head was just in the sand. Obviously, I'm happy to post your own gags, like The Irredeemable Shag'sJustice League #1 Cover Figural Recreation and Tom Hartley's Showcase Presents: Vol. 3 TP, so keep 'em coming!

Solicitations and merchandise spotlights really underperformed. I take great pride in delivering rarities like the 1985 Grenadier Models Pewter Miniature and the 1969 Fleer Martian Manhunter Temporary Tattoo, but maybe the umpteenth t-shirt appearance isn't for everybody.

Martian Manhunter on the web is pretty vague, but it will inspire future Op/Ed, so there's that.

If anyone had 2nd or 3rd choices they'd like to speak up for, there's a comment forum a'waitin' below...

Results of a poll conducted among 37 readers of THE IDOL-HEAD OF DIABOLU, A Blog for J'Onn J'Onzz, the Manhunter from Mars conducted throughout the month of July, 2009.
Posted by Diabolu Frank at 6:30 PM

I very much enjoy your take on various aspects of the character, as well as your opinion of his various appearances. I'm not as harsh on some of it as you are, but I like my critics to make me think, and you often do. Given a second choice, While I do value the solicitations, I'd probably vote for Pinups, since they are low in the ranks and I do enjoy different artist's takes.

I'm glad you like the pin-ups, M.S. I do get comments on them, so I figure that while they're not "essential" they are enjoyed.

It was tough to choose just one aspect of the Idol-Head of Diabolu for this particular poll, Frank. I very much appreciate all of the hard work that goes into this blog! My vote was cast in the fan fiction and mock-ups category, if only because your imaginative descriptions of imaginary issues offer something that can't be found anywhere else. They're great fun to read.

Given a second vote, I'd have to throw my voice in with those readers calling for more op-ed content. Don't downplay your insights, Frank! It's great to hear your thoughts on what's happening in the DC Universe.