There's a fan site called Comic Book Movie that specializes in news about just that. One of their commentators who goes by the name THEHAWK recently decided he would fan cast the entire Justice League, including the Detroit era, JLI, JLTF, Elite, Antarctica-- everyone. No small task, and many of his choices are utterly insane, but some are pretty observant. Besides, even I never gave a second's thought to who would play, say for instance, Maya. You can see the entire list here, but I figured I'd highlight some specific examples for this blog. 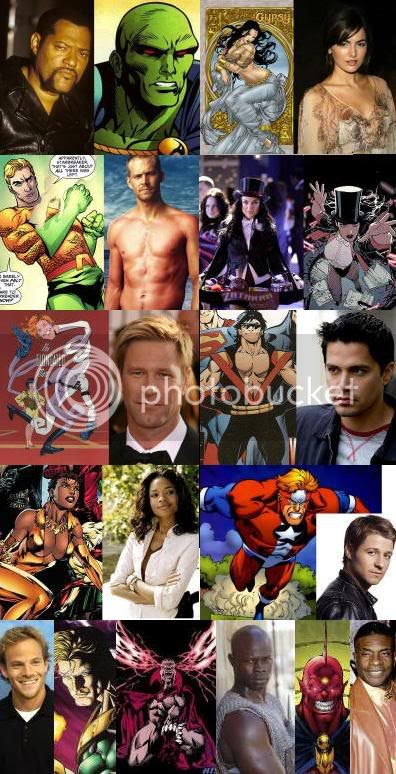 My main issue with most of these choices is that the actors are just too danged old. Gypsy, Zee, Vibe and Steel into their thirties is asking a bit much. Fishburne's already "played" Silver Surfer, and turns up as J'Onn on too many of these lists. I couldn't complain about Keith David as Despero, but that guy is the Sam Jackson of voice work-- he does everybody. I do like Hounsou a lot as Bloodwynd, though.
Posted by Diabolu Frank at 11:59 PM

Fishburne wouldn't work as J'Onn because he's too full of himself. J'Onn doesn't assume he's the coolest guy in the room. Hell, it was years before he revealed himself as a superhero type. Ol' Larry Fishburne has too much flash and not the right sense of humor.

I still prefer Avery Brooks, but I should update my own casting choices of the year 2000.