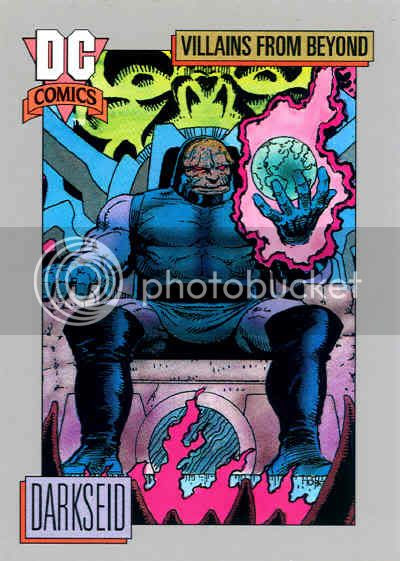 Sorry for the late post, but it's all part of my plot. I'd planned to run Darkseid with the other villains on Sunday, but in my Justice League Detroit post I name-dropped Vandal Savage as a Gypsy villain already seen on this blog, so I needed to make that statement true. I also hoped the preponderance of Savage posts right before announcing the third most important Martian Manhunter villain would con people into thinking Vandar Adg was coming up to bat. Further, after three bitter, contentious school tests this week and one more to come today, I decided to offer a second run of trading card posts this week. They're better than the last batch, but I had to wait until Friday to post the Idol-Head's portion, and midnight was too late for links. 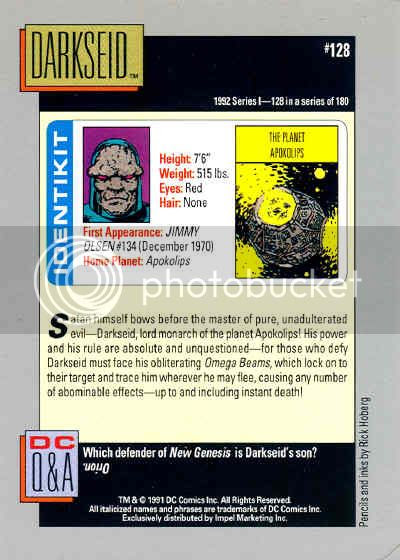 I used to like Darkseid back when he was Darth Vader, or rather vice versa. Apokolips was Nazi Germany, DeSaad was Josef Mengele, and Darkseid was the intellectually superior but morally vacant fascist pursuing absolute power through the technoccult means of the Anti-Life Equation. Unfortunately, Darkseid became popular, and by extension more maniacal and inscrutable over the years, being bad for badness' sake. The Lord of Apokolips also fell under the wheels of the Superman machine, his potency sapped through multiple defeats and his sweeping cosmology absorbed and minimized to fit inside the Man of Steel's conceptual kernel. Through poor characterization and diminishing relevance, perhaps he really will prove to be a Martian Manhunter caliber villain someday, although I'd still rather just reclaim Mongul. Better a third rate Darkseid with personality than the deadly dull and thoroughly played out original.

Posted by Diabolu Frank at 6:02 AM

Wow. I'll have to go back an re-read my early Fourth World trades to discover the Darkseid you described. I don't recall him being that way, but I certainly trust you on it. Now with my eyes open to the fact, maybe I'll see him in that light.

Frank, i have a question. There is Professor Arnold Hugo and a Professor Hugo Strange. Are they the same character?

Completely different characters, but a common mistake. Click on the Prof. Hugo icon in the sidebar for his bio page, while Prof. Strange info is readily available at Wikipedia.

Quite right! It is good idea. I support you.

The author is really cool. But some of the commentators are just posting stupid words.

Simply awesome. And here I thought my generation was the first to master dry wit. Seems I was wrong. ;)