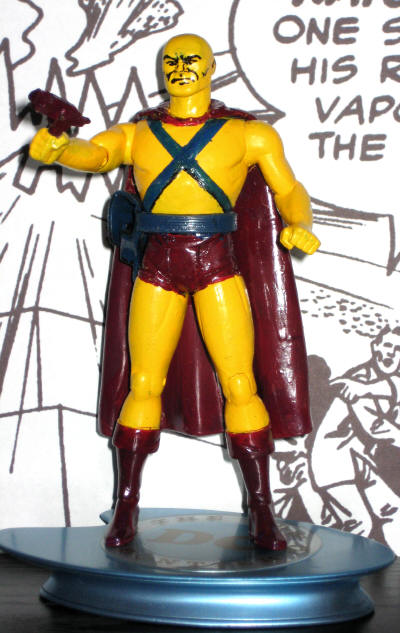 I like to find cool rarities for this blog, so I actually search the internet for materials relating to obscure but important Martian Manhunter related characters. The more J'Onn-specific they are, the less likely it is I will find anything, so sometimes I produce my own. For instance, I almost got Andy Kuhn to draw B'rett, but I was afraid he wouldn't be recognizable in the manner the artist seemed to want to draw him. I kind of thought it would be cool to get Rob Liefeld to do him, but he was charging way more than the novelty was worth to me. B'rett wasn't selected for the commission I haven't heard anything about in over six months either, so the yellow bastard was left out in the cold.

A few months ago, I got to thinking about what else I could do for these characters, and it occurred to me I could create a custom action figure by simply painting a Martian Manhunter one yellow and giving it a gun. Some of the uglier ones would probably work better as B'rett! Well, I had come across a loose New Frontier figure that cost as much as the packaged one I got on sale earlier, but I bought it anyway. Since B'rett was a Silver Age villain, it seemed appropriate to contort Darwyn Cooke's sunny design into a little bad ass. 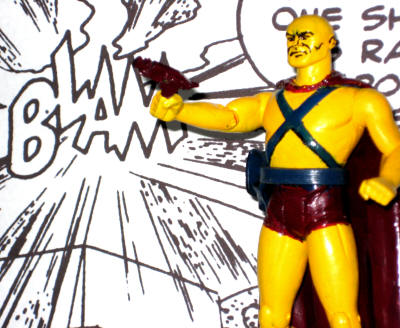 Once I grew out of playing with action figures, I started doing really sloppy customs. I got somewhat better in my 20s, using the crap figures I couldn't sell in my shop, but I was never good exactly. Still, I figured this would be snap. I thought wrong.

All the paints I bought turned out to be too dark, and the paint pen I intended to use for facial details too fat and runny. I went to a hobby shop where a fellow customer droned on for fifteen minutes about techniques for miniatures, but at least he verified the detailing pen I was going to buy would do the job. The actual employees recommended a blue paint that proved the consistency of water and ruined the jaundiced flesh tone on the chest by bleeding through my masking tape. Some painted areas never stopped being tacky. Some areas rejected any attempts to paint over them. Areas became lumpy or cracked from the layers of repainting. When I painted the cape, color transferred to the skin. When I painted the skin, it transferred to the cape. Various other areas did the same in a never ending game of musical errors. It was so vexing that I wrapped all my materials in an old shirt/drop cloth and set them aside for a few months. 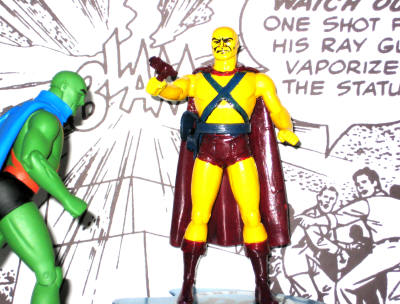 Cutting off the decidedly late Bronze/Modern Age J'Onn J'Onzz collar went okay, but I redrew and painted over the face about ten times, plus countless failed tweaks. I would say I drew at least three distinctly different faces, giving up on print accuracy when certain details failed to translate to my three-dimensional canvas. Not only did this layering eventually alter B'rett's facial tone, but I started having residual details survive the overpaint, and his complexion got rough. I found this appropriate to the character, so I didn't let it bother me overly much. By the same token, I eventually dismissed my concerns about glaring errors in the paint job as a whole, because I had to own my lack of skill and time so I could relax and get the damned thing posted. I'd just avoid the more extreme close-ups I usually do for factory model action figures. A bit of Vaseline on the lens. Another thing that unintentionally worked out was that the dark paints matched the muddy coloring of the scans I have for B'rett's first appearance, so in that sense they were subjectively accurate.

I carved as accurate a gun as possible, handle and all. Like everything else, it painted too dark for any details to show, which became a saving grace when its practical application required more severe cuts. Rather than risk tearing the gun hand open to accommodate the pistol grip, I shaved it to a point and superglued it into the hole I'd bored into the fist. The gun holster came from a villainous Rambo figure I'd bought cheap years prior. It drew left, but was too easy and otherwise functional to be discounted.

I briefly considered trying to paint a soda bottle starship and set it along a pond to serve as a backdrop, but there just was not time in my life for all that. I instead blew up the most suitable panel from B'rett's sole appearance in Showcase Presents Martian Manhunter, and snapped less than a dozen pics against the pop art background. Again, the dimensions proved out of whack in print, but whatever. It was good enough for my charitable purposes, and B'rett looks decently cool set beside his heroic inspiration. 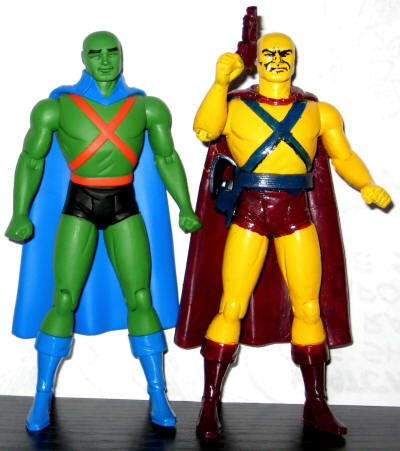 Posted by Diabolu Frank at 1:16 AM

Excellent job. It really looks like Brett. Finally a villain action figure that is solely MM. Are you trying to make anymore? I vote for Malefic (and from reading you site i know you have a clear love for malefic, lol)

I have no current plans to do any more custom figures, but would be happy to publish someone else's. I think a more realistic character might be easier to do, but someone like Malefic would be tough if you tried to go all out with the chains and piercings.

That's pretty awesome, especially the custom gun! What did you carve the gun out of? I like how he's all scowly. The cape came out great. Now I wish there existed some Yellow Martians...