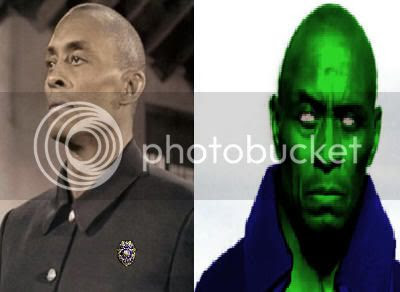 Continuing our synopsis from last week of the "1967 Manhunter from Mars Movie..."

John Jones approached a street corner hustler who knew him only too well. Shades Cooley asked, "What's your bag, Fuzzy John? I'm out here tryin' to score some scratch, but you're putting the kibosh on my action, man!" Jones told Shades to cool it with the lip, or he'd get run in. The Man had some questions about a new outfit in town called "Vulture." Cooley's eyes went wide enough to crest over his shades, and he made a break for it. Jones gave chase down the street as an up-tempo sax theme kicked in. Jones grabbed Shades by the shoulder, and as he spun around, Cooley popped a switchblade and jabbed Jones in the chest. When Shades drew back his blade hand to threaten another stab, he did a double take when he realized all he had left was the handle. Before Shades could get over the shock, Jones wrapped his long fingers around Cooley's lapel and picked him up off his feet. "You just attempted to murder a police officer. You'll tell me what I want to know, or I'll put you in a hole so deep, you'll have to learn Chinese." Shades lamented, "I fink, and even that won't be far enough away from Faceless!"

Jones drove Shades to a deserted back road so that he could "spill." Cooley explained that a whole new crop of criminals had been coming onto the scene for months from across the globe. "Wops, Krauts, Reds, Buddha Heads-- Limeys to Camel Jockeys. Everybody! All the crime in the world's been coming here to roost!" Shades didn't know who was running the show, but word on the street was that the big man was so undercover, he didn't even have a face to speak of.

In the distance, Jones and Cooley could hear a car horn blasting with a frantic staccato. As they searched the horizon for the source, a group of heavily armed men approached from the opposite side of their vehicle. Machine gun fire tore through the air, riddling Jones' ride and shredding Shades. Windows shattered and the engine caught fire. The assassins surveyed their handiwork, and content the two men were dead, stomped off in the direction from which they came.

A second car skidded to a halt near the burning wreck, and Diane Meade emerged from within. Rushing to what was left of Jones' car, Meade saw John looking back at her through the flames. Brass instruments screeched discordantly to express Meade's shock at Jones appearing to have dark green skin and cloudy white eyes. Jones' door wrenched open, and the detective stood up to reveal a suit in tatters from the hale of bullets, but no signs of blood loss. However, Jones stumbled and fell to the ground. Meade knelt down to help Jones to his feet, and supported him as they crept back to her car and sped off.

At first, sweat dripped from Jones' olive colored skin, and he appeared deathly ill. To stave off her anxiety, Meade rattled on about how she had been following John as part of her unofficial investigation, and tried to warn him by honking when she spotted the gunmen. As the pair drove further from the accident, Jones slowly began to regain his composure, and his skin seemed to return to a more normal shade of brown. "What just happened back there, Jones? What... what are you?" There was a pregnant pause, and then with a sense of resignation, Jones replied, "That was the first strike of Vulture against us, Diane... and I am the person who will stop them. I am a Manhunter... from Mars."
Posted by Diabolu Frank at 12:00 AM

Ooo! Exciting! I wonder what happens next.

I especially like the dialogue exchanges in this movie.

From Draba to Draba, eh? I'm not familiar with Simmons' work, but what I found online looked solid. I'm honestly not all that well versed on Woody Strode either, but took my cue from an original Silver Age fan I used to consult in the late '90s.

Liss, I'm trying to stay on the '60s side of the decade divide with the dialogue, but I'm struggling with my more Blaxsploitation inclinations. I need some drag racers or Rednecksploitation to help keep me in line.

In the past, my fan fictional tangents were posted in one massive brick of text, but I'm finding serialization is a lot easier and more warmly received. Any suggestions for casting Professor Mark Erdel?

Hmmm...off the top of my head, Sam Jaffe:

There's another older actor that could work who was in a few episodes of The Twilight Zone, but I don't know his name.

It has to end sometime, so I can get started on the sequel...

Liss-- completely unfamiliar to me on first pass, but I've got a copy of The Day The Earth Stood Still around here somewhere...

He plays the role of eccentric-but-likeable professor pretty well. And he has frizzy scientist hair.

Definitely watch it if you have a copy. It's a great movie and has some nice overlaps between some of the morality in a good J'onn J'onzz story. Plus it has one of my all-time favorite quotes regarding stupidity.

I'm wondering if in this movie they'll make Faceless a Martian. Maybe Faceless will get away at the end, with his identity remaining a secret, so that in the sequel Jones will have to infiltrate Vulture's European operation disguised as Marco Xavier. David Niven would probably ask for too much money. And anyway, who says an international man of mystery has to be white? "The name is Jones, John Jones. That's MISTER Jones to you, honky."

John Jones will be the only alien in the first movie. We'll have to see about Mr. V's identity. I'm saving all the other Martians for the sequel. As for Marco Xavier, Billie Dee Williams works every time.

I don't see the early thirties as being too young for Marco, but I won't be using him myself, anyway. I was thinking "John Jones Rides Again!"

I didn't realize how old he was. I thought he was still in his 30s when he did EMPIRE STRIKES BACK. But Wikipedia says he was born in 1937. Yeah, he would be perfect for Marco.