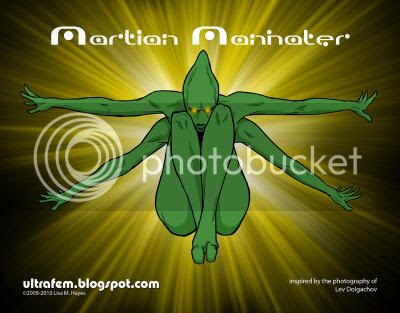 Back when I did a post on J'Onn J'Onzz's mother around Mother's Day, I figured I'd go the same route for Father's Day. Well, that was yesterday, I forgot all about it, and don't really feel like going whole hog with a biographical post today. I'm also tired of scrounging up Miss Martian art early on Monday morning because I'm too busy/lazy to do better. Finally, I wanted to go through Comic Art Fans and just line up all their remaining Miss Martian pieces, so I can move on to the tremendous task of attempting the same at deviantART.

Anyway, this Monday is a bit weird. I cast my net broadly, and though I skipped out on all the Dejah Thoris and most of the "random green Martian chick" stuff, I almost let an oddity like Lobo & Martian Girl By Tony Harris slip by for kicks. The alternative I chose is actually worse, because despite surface similarities, that is not D'Kay D'Razz up there.

The Martian Manhater was created by Lisa M. Hayes for her pornographic super-team Ultra Fem Five, from a blog of similar name. To say the least, the related images are graphic, and I decided against direct links there to keep this blog's mention within the bounds of internet work safety. I can't even mention her risque pun of an alter ego. Let's just say that arms aren't the only thing she has four of, and leave it to an unfiltered Google search if you want more... information.

Technically, despite the gender, Martian Manhater falls under the heading of Martian Manhunter Knock-Offs. She has most of the common Martian powers, except those related to intangibility and vision. Her actual sex is undetermined, and her planet of origin is most likely not Mars. She hit Earth sometime in the mid-90s, and, um, that's about all I can talk about on a PG-rated blog, especially in regards to other sorts of "hitting" she's gotten up to...
Posted by Diabolu Frank at 1:37 AM

Frank, I decided NOT to go there. However, perhaps we should be glad that the creator of this knockoff does not know that you have called Cyborg "the Thing with batteries."

Just when you think the Internet has run out of weird....