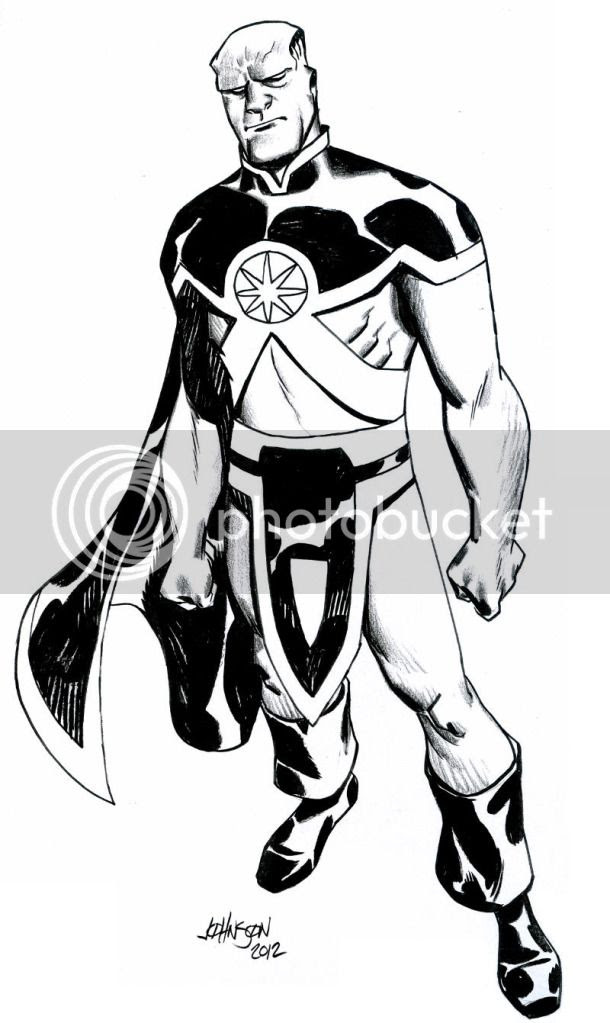 As I mentioned here repeatedly in the months leading up to Houston's Comicpalooza convention, one of the artists I was most anxious about getting a piece from was Dave Johnson. I was introduced to his work through Chain Gang War in 1993, and enjoyed watching his style evolve through projects like Superpatriot, Penthouse Comix and a plethora of great covers on books for which his frontpieces were often the selling point. I especially enjoyed his too-brief runs as cover artist on Steel and Captain America. While someone like Scorch or Bette Noir would seem more in line with the rock n' roll meets noir sensibilities of his art, he can also knock out a superior straight super-hero when he's so inclined. I pretty much had to make this a Martian Manhunter piece due to the projected expense, but I wanted to throw in a twist. Since DC Comics had yet to release the design artwork for the New 52 Martian Manhunter, and the revised look seemed to compliment Johnson's style, I figured he could supply a proper "study guide." I was also hoping to get either a Joe Kubert or Howard Chaykin Silver Age Alien Atlas as a bookend for the concept, though neither ultimately materialized.

Upon first arriving at the con, I repeatedly stalked through artist alley, specifically looking for Johnson. Since he was my "big ticket" artist in terms of price and there was potential cause for concern that he might fill up his commission list early, I felt the need to address whether I was going to work with him or not as soon as possible. Once I saw the reverend and fellow guest/commission prospect Andrew Robinson had settled into an endcap booth, I zeroed in. I knew Johnson was going to cost me $300, and I was hesitant to spend that kind of money on one piece. Still, I've been a fan for nearly twenty years, and my girlfriend egged me on. It also didn't hurt that a sweet Nick Fury commission that I'd seen online and built my expectations around was right there in his portfolio.

Johnson seems to be kind of quiet, surprisingly. I goofed with his business representative a little as he took down my information, but it was a somewhat sober transaction altogether. Johnson was busy working on a nifty Iron Man sketch, and later I'd get to see his Lobster Johnson (no relation presumably, and no euphemism certainly.) The man slings good ink though, as you can plainly see!

I'd also wanted to get a black & white Andrew Robinson B'rett, since his spaghetti western-meets-punk rock seemed ideally suited for the attitude of the gunslinging yellow-skinned Martian crook. Even going in though, I realized that after having to cut my con budget, it would be unlikely. I confirmed from his quote sign that it would run $250, which was too rich for my blood, so I had to move on. I needed to leave the con a bit early, but I got a text from Johnson's rep that he'd finished, and ended up indulging in a preview thanks to the instant gratification generator that is Twitter. Johnson also tweeted a preliminary sketch, so it's cool to see his process. I got back to the booth the next morning to claim my piece. Like Joplin and her Mercedes Benz, my friends already had one, so I had to make amends! We both have a Kevin Maguire, but Anj's still up on me by a Chaykin. Curses the fates! I will have satisfaction, sir! You want to know my favorite thing about Johnson's take on the New 52 J'Onn J'Onzz? Despite the spookier look, he's still a friendly face who totally has a stash of Chocos. Truth.

One of the major reasons that I splurged so gratuitously at the con this year was to have some swell material to lead into the blog's fifth anniversary this September. In the tradition of Comics Alliance's Best Art Ever (This Week) and Comic Vine's Awesome Art Picks, every week for the next four months will feature "Best Awesome Alien Atlas Art Picks Ever (This Wednesday,)" or y'know, something like that. Hopefully they won't all end up on Twitter/deviantART/Blogs/CAF or the aforementioned columns in the meantime, as I hope to have some sweet debuts and some surprises that no one would ever see coming. Above are teaser snippets for the beauties, but for now, I figure Dave Johnson started us off right...
Posted by Diabolu Frank at 12:00 AM

I think this is a great piece conveying some of the majesty of J'Onn. I also think these is some nice nuanced rendering here to give it some depth and heft, something I feel is missing a bit from my piece.

Thia is a great piece, Frank. J'Onn seems to radiate [power and confidence but not cockiness. He seems ready for what is ahead of him.

In some sad news for fans of Mars, Ray Bradbury has passed away at the age of 91: http://latimesblogs.latimes.com/lanow/2012/06/author-ray-bradbury-dies-at-91-daughter-says.html

That is a great piece.

I love the angle on this, and the posture. Like will said, confidence without cockiness. I'm just not a fan of the DCnU costume.

Oh, Ray...my favorite author of all time. We have him (and Burroughs) to thank for our notions of Mars.