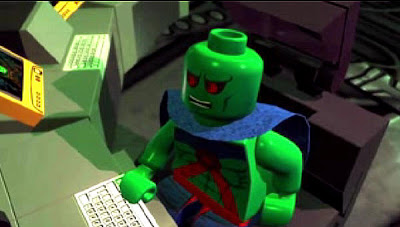 I heard about the launch trailer for the new Justice League Lego video game at Comics Alliance, which noted it's especially for "those who've been eagerly awaiting the Lego debut of the Martian Manhunter (You know who you are)," which I expect means us. I was pleasantly surprised that J'Onn J'Onzz was included, and they even re-skinned what was probably a Brightest Day body with the New 52 costume. He looks good and has a nice sized role in the trailer. After being happy, I got a little down. For starters, the Alien Atlas seems to be in the Oracle role in the story, simply relaying information from the Monitor Womb. I think you can unlock him as a playable character, though. Next, Cyborg appears, waiting in the wings to take J'Onn's spot in a future installment. Third, with all the characters appearing in the game, odds are slim for an actual Manhunter Lego Minifig. My girlfriend collects the things, so I'd love to add him to the Wonder Woman and Captain America she passed my way. Fourth, it finally hit me that with a Justice League motion picture being rushed into pre-production in the wake of the success of Marvel's The Avenger, what are the odds that they'll also include a large green-skinned team member and beg for calls of plagiarism? I'm a glass half empty kind of guy, clearly. Enjoy the video. You might also like to check out the Martian Manhunter Brikipedia Page.
Posted by Diabolu Frank at 1:08 AM

I for one am excited that he'll be playable, and they can avoid the hulk comparison by making him wiry and relatively normal sized, not to mention more cerebral, personality wise.

that video was awesome! thanks for sharing Frank.

M.C., you just described the Coulson/Vision that damned well better be in Avengers 2 with hints dropped on the back end of each of the next few movies. Coulson lives, mothertruckers!

Nope sorry. No Martian Manhunter in the JLA. Once it hit me, I knew it in my gut to be true. We'll be getting Superman, Batman, Wonder Woman, Flash and Green Lantern. Diana gets in because they must have a girl, and maybe they'll push someone like Cyborg through for color. Aquaman is a definite pass as well, I feel, due to lingering biases in the public and a too-specific working environment. DC's been pushing their top five in licensing for several years now, and without separate movies to introduce the majority of the team, they'll need to pare down the line-up. The momentum on the "Magnificent Seven" is gone, and 5's more workable.

AHhhhhh!! Lego J'onn!! I was all excited until I saw "Cyborg." Hey, even if he's in a few cut scenes I'll be happy. I'm sure they got that Oracle-esque role from The Brave and the Bold cartoon since he always seems to be in that role on that show.

And what? A JLA movie?! I'm so out of the loop. I'm a glass-is-half-empty-and-full-of-point kind of person, but, darnit, I'm holding out an irrational hope that J'onn will be in this movie. Maybe it's more denial than hope, but oh well.

Or maybe there will be another reboot before the movie is produced. More likely scenario.

White Martian Manhunter? Or maybe a strictly Afro-Martian one? Hell, red like a Saturnian, if that's what it takes.