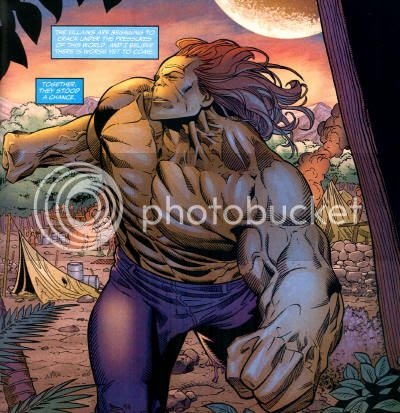 Vandal Savage's daughter Scandal like to have killed Bolt over a bit of sexual harassment. Way to play down the lesbian stereotype. Lex Luthor did some more speechifying, having enlisted Thaddeus Sivana, General Immortus, and Anthony Ivo's aid in constructing a device to escape the Hell Planet. The Joker thought it was hogwash, and rabble-roused to avoid contributing to any society, even one made up of super-villains. A giant monster attacked, so the Joker told Super-Gorilla Grodd to command Chemo to fry the threat in a toxic bath. The Clown Prince then took all the credit.

Mr. Terrible called a lumbering worker a blockhead, but when the towering hulk corrected "Blockbuster," he backed down quick. Sivana thought that guy was dead, while Lex knew this was a different Blockbuster than the one he'd created.

Iron Cross yelled at some of the women to help with the building process, but they and other layabouts blew the Nazi off. Kid Karnevil went so far as to threaten the Aryan Brigade member, and got backhanded like the little boy that he is. A rumble started, so the Joker put a bullet through Iron Cross' head before ordering a previously scheduled mutiny. The chaos was short lived, as Grodd recognized Luthor had already prepared for Joker's sudden but inevitable betrayal, and laid a psychic whammy on everyone to "lay down your weapons and cease fighting... You are too tired to fight any longer." The end result was a division into two camps, with Joker leading an exodus into new territory. 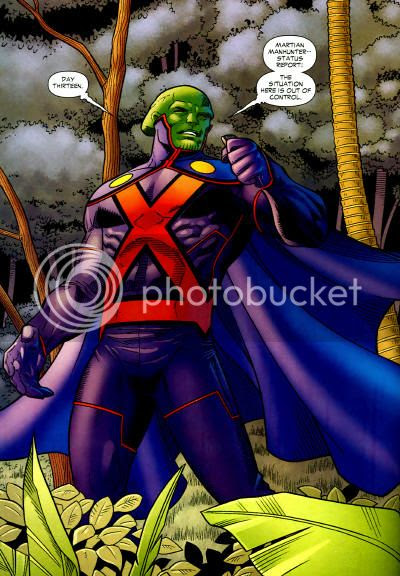 Sivana criticized Luthor for this turn, but Lex had kept the irritating Clown Prince around specifically for the purpose of clearing out "the worthless half" of the camp and hoard all their once shared resources. Lex had even talked Iron Cross into instigating, thus creating an enemy for his camp to unite against.

Blockbuster remained with Luthor's group, but snuck away for a while into the bush. "The villains are beginning to crack under the pressures of this world. And I believe there is worse yet to come. Together, they stood a chance. Divided, they'll be consumed. Is that such a terrible thing? Would Earth not be better off without them? Or is leaving these villains to their fate the same as murdering them? I pray that the decision does not become mine to make. For now, my job is simply to observe." Pale blue caption boxes slowly turned green with a red x in the background. "Blockbuster" saw his long hair fade away and his morphing bare skin covered in a uniform. His secret transformation complete, a communication device was brought near to mouth. "Day thirteen. Martian Manhunter-- status report" The situation here is out of control."

"All You Need Is Love Hate" was by Matthew Sturges, Sean Chen and Walden Wong. The change in writers didn't cause the slightest blip in variation this issue, probably because he's a regular collaborator with Willingham, and the whole plot was probably editorially mandated, anyway. I can't stand it when a powerless, addle-brained and generally useless character like the Joker gets treated like a king based solely on his popularity. When the clown tried to get folks to eat the monster Chemo had contaminated, I wish Grodd would have forced him to follow through on it himself, so he could choke on poison like a cockroach.

Wouldn't it have made more sense to just nuke the supervillains from high orbit just to be sure? Sorry, I think that this series and a few others showed how badly J'Onn was used in the previous continuity. Let's say that in some ways the continuity is a good idea as it cleans up a lot of problems. (If I were J'Onn and came back from the dead, I think that it would be time for a long talk with some people.)

Set aside the death penalty debate for a moment. Why in the frig would these villains escape back to Earth, only to send back for a captive J'Onn almost immediately afterward and kill him on the planet where all of his vindictive friends live? This is a Martian Manhunter blog, but pick any random villain here and ask the same question. Why bother capturing a cat burglar with romantic tires to Batman, who will surely miss her and has already been a problem for your organization. Why make explicit the fact that this was all the Suicide Squad's doing, thus make yourselves a target when the villains you've failed to kill inevitably escape?

As for the death penalty argument, super villains are a potential resource in times of conflict. Amanda Waller especially would recognize this and retain access to their powers. Canonically, that actually makes sense.

Frank, in general, I oppose the death penalty and can see using supervillains. However, this series and the followups had a few logic holes. The entire Justice League and allies, in a logical world, would likely have pulled out all the stops to bring J'Onn's killers to justice. Indeed, you could argue that it would be the equivalent of a declaration of war. As for the Suicide Squad, I think that a death wish is not supposed to be part of their charter.

Overall, I think that Salvation Run had plotholes that you could fly the Death Star through with room for the starship Enterprise.

I'm not opposed to the death penalty in theory, just in execution (rim shot!) So many people on death row got railroaded and overturn their convictions after years of appeals, it's difficult to practice in good conscience. Still, some folks just need killing, and if it's justified, flip the switch.

As far as it goes with super-villains, killing heroes is bad for business. I don't believe that most of the people involved in the Martian Manhunter's murder would fail to see that, so it comes down to bad writing. I'm glad Rucka at least dealt with Dr. Light and Effigy, but they were just sacrificial lambs in a room filled with guilty parties. The closest we came was Cry for Justice, who aside from torturing some random villains, only amounted to the Anti-Prometheus League.

i have the first 4 issues of this series and i wish i had the rest but at least i've been able to read much of the others online through random clip art i've found here and there. by the way Frank, Young Justice still rocks i set my DVR for it every weekend.

Is the first season out on DVD yet?

I think you'd dig the rest of this series. It's brutal.