The Conceptual Hall of Shame: The Vengeful Childhood Friend 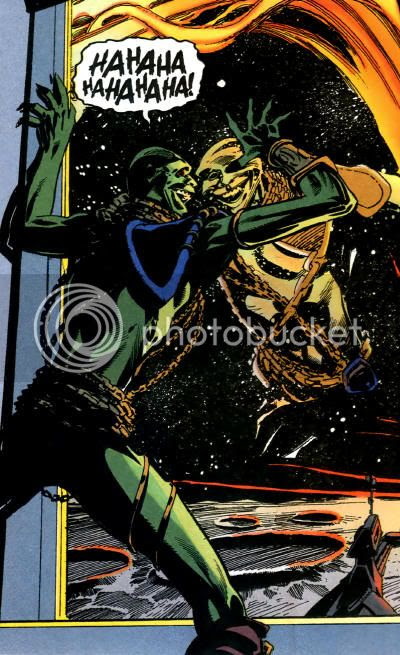 While I was looking up analysis online of the various played out tropes indulged in during creators' usage of the crappy Batman villain Hush (short version: all of them,) I found an old post at The Absorbascon blog under the heading The Conceptual Hall of Shame. The subtitle was "The Vengeful Childhood Friend," and I assume it was intended to be part of a series. I actually posted a comment back when it was published, but I don't recall if the series was ever continued, and the blog has a horrendous archival system.

Anyway, the thrust of the post was noting that it's a lousy idea to retcon a childhood best friend into the cannon of a well established super-hero who then arbitrarily makes a heel turn into super-villainy. From Conduit to Cobalt Blue, the writer implant usually blows up in the project's face and becomes the subject of endless ridicule.

Curiously, though not entire unpredictably, Ma'alefa'ak bucked this trend. Likely due to the reading public's lack of knowledge about the Martian Manhunter's publishing history, John Ostrander and Tom Mandrake managed to check off every "not-to-do" box discussed by Scipio, and it was actually embraced by modern fans, to the point where he became the first true Manhunter rogue to make it into animation.


Beat for beat, Malefic is this trope. He even replaced a preexisting younger brother, and made sure to sit through fifty years of Manhunter crime fighting before swinging by the Earth teleportationally (while J'Onn just wandered around waiting to get zapped by Dr. Erdel.)
Posted by Diabolu Frank at 12:21 AM

Agreed. Ma'alefa'ak is the exception, I was first introduced to him from Justice League Doom. He's a hard and dangerous character there and the more I learn about this guy the more I like him. He's no trope.

Doom really helped to improve my perception of Ma'alefa'ak. I vastly prefer the cartoon costume, which lends the character a disturbing sensuality heightened by the incestuous/narcissistic quasi-seduction of his brother. It turned him from a one note cackling evil nutter to something uniquely disturbing. I find Pinhead a lot creepier than Chucky, see. I do regret that the cartoon's pronunciation has derailed my prior achievement of being able to spell Ma'alefa'ak, though. I keep wanting to type Ma'allah'fa'ak now.

It is precisely because J'onn's past is so ill defined that Ma'alefa'ak works; Post Crisis the Martians were reduced to figments of J'onn and Erdel's imagination, and not much else was said about them until Ostrander.

Did you bring this up having read Batman 10?

Well, the idea was to make the alien stuff more alien by leaving it alone and just focusing on J'Onn as a sole survivor on Earth. Comics being comics, that notion of less is more eroded as soon as Gerard Jones gave us the Master Gardener, later joined by Glenn Gammeron, and thoroughly exploded by Morrison and Ostrander.

My issue was that Ostrander treated the character as a blank slate, either introducing newly invented characters or making the Martian Manhunter dependent on outside elements from other franchises. If a psychotic brother was necessary, use the one that already existed and give him a better motivation than born evil. As you said, it worked because hardly anybody knew any better or cared, myself included to a large degree on the former, but I still had major issues with Malefic as an independent construct.

The timing was pure coincidence. I was doing a write-up for next week's SurVILEvor Island, and wanted to back up a tossed off Hush reference. That draft got eaten by a screw-up in my trial antivirus, but it led to this post, so yipee. The Batman turn is kind of cute because it's New 52 and Bronze Age cannon, but that guy needs to die before the novelty wears off.

I think that the Ma'alea'fak works despite the tropes. He is an exception to many rules. I agree that it seems as if fans often have a better grasp of continuity than the writers. So, if Ma'alea'fak is reintroduced, I would hope that we have a better reason for his insanity. Perhaps he struggled with himself and some event sent him over the edge. (Perhaps he was captured and tortured by Darkseid, and decided to give in to his own darkness.)Perhaps they can use some of the Cain and Abel dynamic, with Ma'alea'fak seeing himself as truly damned -- and believing that any attempt at redemption is futile or even undesired.

As for Batman, I think the novelty of a secret brother will end soon. My advice is to have him die and Batman have to deal with the consequences. Perhaps, despite what has happened in JLA #9, the last son of Mars might have a few insights to share. (Somehow, having just read the most recent issue of Stormwatch, I think that they will soon be a public organization again -- or at least known to a few elites -- and that there has to be some big plans for J'Onn -- who is a much more recognizable figure than Cyborg, or as you call him, Frank, the Thing with batteries.)

I guess I'm the lone holdout, but Malefic never worked for me, and not for any one reason I can lay a finger on. He always just seemed a tad contrived and tacked on to the Martian Manhunter mythos. Plus I didn't like how it rendered J'onn's mother the indirect cause of Malefic hatred: if you're going to deliberately name your two sons "light" and "dark" he's probably going to grow up hating his entire race, or at the very least, his family. Couldn't she have picked another name?

Even the name "Malefic" is so heavy-handed in and of itself and it just pulls me out of the story. (Kind of like Mal in Inception.)

I'd always rather J'onn have an intelligent human matermind-type adversary rather than a Martian foil. (Unless we're talking Master Gardener, but he can't be a recurring character.)

Psst-- My coping mechanism is that the entire Ostrander/Mandrake series is being told from Ma'alefa'ak's perspective. As Will likes to bring up in regards to Lobo, Ma'al is an "unreliable narrator." He's really T'Omm J'Onzz, driven insane by the death of Mars, and "raised" as an addled late adolescent by friends of the family. J'Onn doesn't marry until Mars II, which is the one where "Malefic" was born. From that perspective, it all suddenly makes sense.

You did say you saw the "Doom" cartoon, right? I liked Malefic in that a lot more than I have his comics appearances, and anyway, we're stuck with him. Best to make the best of it.

I could see the Ostrander series having Ma'aleafa'ak be the hero of his own story. I've got to chew on this a while and piece it all together.

I haven't gotten around to seeing Doom yet. I'll have to check Netflix.

But denial is my favorite coping mechanism! I thought maybe Ma'al was a victim of the New 52 and just got swept under the rug somehow. J'onn is the one character that I always felt is the exception to the rule of being defined by one's rogues. Trying to saddle him with a nemesis never worked for me, for a reason I could never put my finger on. Maybe because I'm so stuck on J'onn as a noir hero--and the villain in noir is often so nebulous, obscured, or winds up being a supposed ally. Giving J'onn a clear, identifiable villain renders the noir aspect completely irrelevant. How can he chase shadows when we (and he) know who's to blame?

Oh, Ma'al's backstory definitely has to be muddied up. As written, J'Onn would have to be a complete imbecile to keep defending his brother, making him partially responsible for all the mayhem. Ostrander's maniacally cackling Ma'al is basically the Joker with super-powers, which makes him that much more abysmally obvious. Malefic's going to return sooner than later, so I hope "Doom" helps writers get a good handle on redeeming the character. He's get a bit more of Faceless in him there, to heighten the paranoia and shadiness.

Well, I finally saw Doom and I was rather impressed. (Most impressed by there being a hint that J'onn has a secret identity (!) and is employed as a cop.) And Malefic's...or Malla-fa-lak, as they pronounce it now--has a small, but well-written part in it. They never actually state in the movie that they are brothers, though, which I found odd. He isn't much more than a vehicle to disable J'onn--I was expecting a bigger part. But there was a creepy vibe to it that fit him. I'll still never be fully on board with Malefic, but this was an incarnation I much rather prefer instead of the over-the-top chain-wielding hysterical version of the Ostrander series. I liked the costume design, too, with his face half-hidden.

And in Doom we had two Martian Manhunters for the price of one: Phil Morris was the voice of Vandal Savage. Wasn't expecting that. And Nathan Fillion as Hal Jordan is a stroke of genius--fans had ben casting him at GL preceding the live action movie.

The only thing that ruined it for me was that this felt like a propaganda promotional film for Cyborg's induction to the JLA. A little too heavy on the "See? He can do things the other Justice Leaguer's can't, therefore he has to be on the League!"

I have a Cyborg rant coming, though it won't be here.

Vandal Savage was the only villain provided a back story in the cartoon, so if anything, going into more detail on Malefic would have been peculiar in context. Mentioning they were brothers might have also caused the cross-dressing to be nixed, which was my favorite bit of creepiness. It was enough that readers knew the score, plus the same actor played both roles. Ewww.