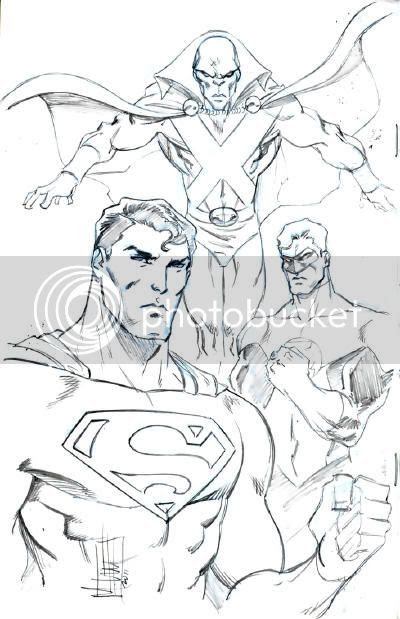 Also featuring Superman, Supergirl, Batman, Green Lantern Hal Jordan, and Jade. What, no Miss Martian or Batgirl? Are J'Onn and Bruce to be taken as a couple? I can see that, actually.

By the way, Seeley's Hack/Slash is a great read for fright flick fans. I've reviewed the first two trade collections on my PG-13/Soft R "whatever" blog, ...nurgh...:


In late 2000, a consortium of comic publishers came up with the idea to create a financial safety net for comic creators, much in the same fashion that exists in almost any other trade from plumbing to pottery. By March of 2001, the federal government approved The Hero Initiative as a publicly supported not-for-profit corporation under section 501 (c) (3).


Special thanks to Firestorm Fan for the notice!
Posted by Diabolu Frank at 12:00 AM

Sorry, Frank, but I could not resist this based on one of your comments. (In a way, it makes sense, as J'Onn as a telepath is perhaps one of the people who could understand the Dark Knight). So, you may find this amusing if you have not seen this already: http://io9.com/5759457/5-reasons-why-i-want-to-make-love-to-the-martian-manhunter

Pretty reasonable points made. I do think JLTF #8 cemented J'Onn as heterosexual by Earth standards, but it probably wouldn't hurt his New 52 profile to be THE hero of the omnisexual. It's the next, next, next civil rights issue, after all.

Well, one thing that J'Onn has in his favor in the romance department over the rest of the DCnU is that he will understand others. Also, Martian biology is so different from human biology one has to wonder whether such divisions as male or female or White, Green or Pale are just choices.

If the same move was made with J'Onn J'Onzz in the New 52; including his having a gender-neutral marriage or same-sex family via the differences in Martian procreation; I'd be totally supportive of that. However, pre-Flashpoint, he was pretty unambiguously masculine and attracted exclusively to females of various races/species. He made reference to being uncomfortable in female forms, and his self-created image was thoroughly "butch," what with the bald head and muscles and all. I'm all for progressive thinking going into the reboot, but pre-boot, J'Onn was downright conservative in his personal gender issues. Actually, one of the things I dug about Malefic in Justice League: Doom was his choosing an attractive female for to seduce his brother. Very Brian DePalma, and I think it would be majorly interesting to see Ma'alefa'ak's more ambiguous/deviant sexuality played against J'Onn's comparative rigidity.