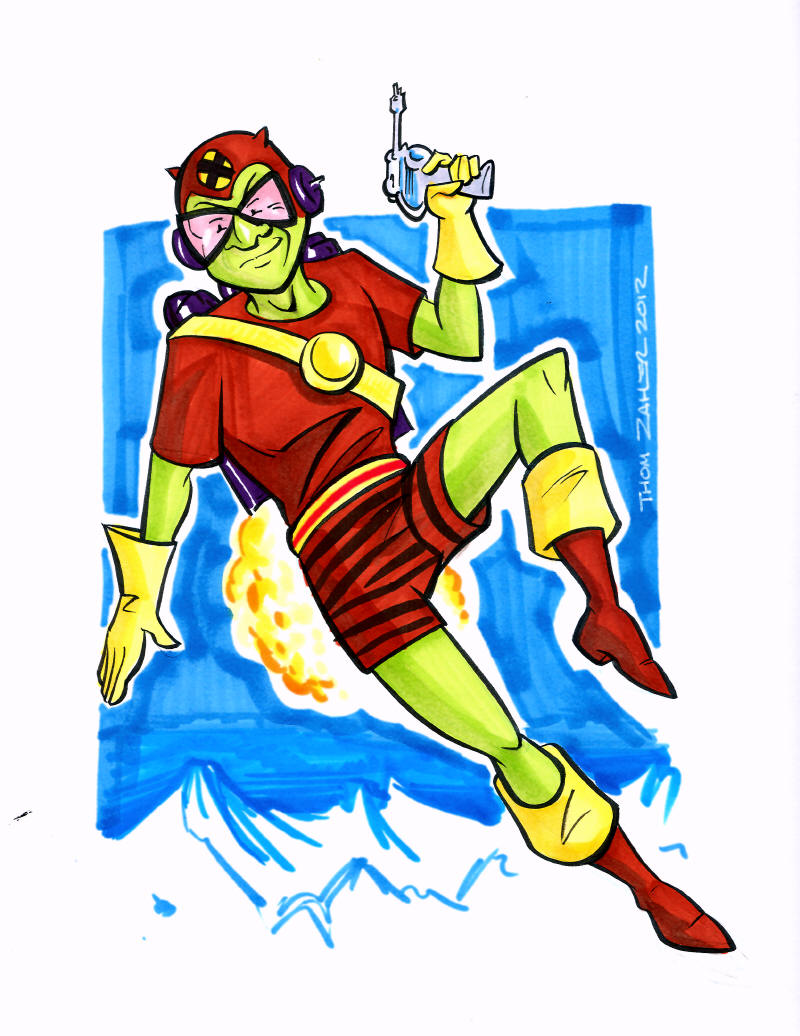 Best (Martian Manhunter) Art Ever (This Week) continues! This commission is a prime example of how, no matter the extent of my advance planning, you go where the con takes you.

I put a lot of thought and research hours into which characters would get drawn by which artists. I also knew that I wanted to get a lot more pieces this year, to diversify the character pool and augment my personal half-decade celebration of the blog. That meant I needed someone who could draw a wide range of really oddball, often retro characters for a reasonable price, preferably in color. Thom Zahler absolutely fit that bill. I went to his web site to check on his commission gallery and rates, and found that he offered digitally colored 8.5 x 11 pieces for just $50.00. That was such a great deal for such fine work, I actually started crunching the numbers on what it would cost to run a Thom Zahler here every week, and coming to my senses, considered one a month. I like my little sidebar directory of character figures leading to biographies/devoted sub-menus, and want Zahler to hook me up with some custom numbers. Zahler was supposed to be "my guy" at the con, the one individual I was confident that I'd get a piece a day from, and had the roll call of potential subjects hammered out to see it through.

True to my intentions, I approached Zahler the first day of the con, introduced myself and the blog, then asked for a commission of the original Silver Age Manhunter from Mars. You can read the full profile for Roh Kar, First Lawman of Mars, but the short version is that he was a goofy dilettante detective who ended up having to pursue an actual Martian criminal to Earth. Once there, he teamed up with Batman and Robin to catch his man. "The Manhunter from Mars" must have gotten some nice mail, because a couple of years later, elements from the single story were recycled for the introduction of J'onn J'onzz in his own ongoing back-up series.

As it happened, Zahler was doing so well promoting his comic Love and Capes at cons that he was getting low on stock, and anticipated doing a lot of commissions. As he would later note on his blog, "The show didn’t disappoint, and I got a bunch of really interesting requests. The 1940′s Martian Manhunter… yeah, I never heard of him either…" Regardless, Zahler did a swell job of capturing the ray guns & jet packs fun of the guy, and I fully expect that I'll add it to the sidebar in due time.

Zahler was the only artist to ask me if it was okay to tweet the picture, and I happily agreed. It's a nice place to immortalize comments like "I am drawing a commission of Roh Kar. Yeah, you heard me. I love the obscure ones." It also means I get to see the works in progress, like this uncolored version. Zahler's a real pro, and I look forward to scoring art from him again.

Therein lies the rub. One artist I had an online quote from was charging nearly half again that stated price, which meant I wouldn't be buying anything from him. Other artists had special "con pricing," which was significantly less than a planned commission runs (a.k.a. the normal direction prices go from advertised to cash in hand.) Zahler offers the exact same $50 price online or in person, and he's easy to contact on a dedicated, trustworthy web site. I could comfortably work out commissions from Zahler pretty much at will, and in fact by doing it over the internet, I get the black and white original and a computer colored print, the best of both worlds. The only hang-up would be shipping, but as I mentioned, I'm likely to get a whole batch of commissions at once, seriously minimizing the cost to receive each. As much as I dig this Roh Kar, the net effect was to disincentive getting more commissions in person in favor of pursuing a variety of artists. That also meant my sheepishly passing by Zahler's booth the rest of the weekend in pursuit of other commissions, hoping he didn't take it as a slight against his work, which I enjoy enough to happily buy in the future through the convenience of the world wide web. Zahler is friendly and reliably produces work of high caliber. He did a ginchy piece that overcame my shoddy reference, and check those sweet mountains in the background! I still have my grocery list of commissions perfect for his style, and now only wait for my wallet to cool down and heal up in the middle so I can talk to him again...

Posted by Diabolu Frank at 2:05 AM

Yes! This guy HAS to be The Official Idol-Head Side-Bar Character Artist!

I was glad to do it. It was a ton of fun. And no worries whatsoever about getting other artists, too. That's part of the fun of shows.

I agree on your experience with Thom. I have a few pieces by him: http://www.comicartfans.com/GalleryDetailSearch.asp?Artist=Thom+Zahler&GCat=10225. Check them out.

BTW, if you aren't reading Love and Capes, you are making a mistake.