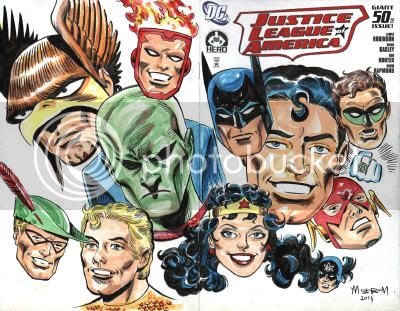 Don't try to tell me that Milgrom didn't draw Martian Manhunter, Superman, and Hawkman then go "oh crap, how am I going to fit any other heads?" Excuse me, but I've got a touch of bateye. Hmm, got a bit of Wonder Woman in my teeth. How about Firestorm floating like a Sword of Damocles over J'Onn's head? That's just cruel.

Special thanks to Firestorm Fan for the notice!
Posted by Diabolu Frank at 1:50 AM