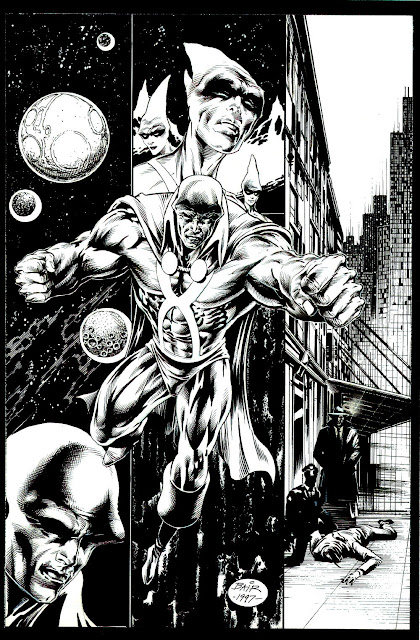 While I'm mostly focusing on new material for September's month long celebration of our fifth anniversary, this piece cried out for revisitation. It originally ran early into year two on December 31, 2008, marking the eighth or ninth anniversary of my winning the piece in absentia while at a New Year's Eve party for about $100.00. I figure a lot of current blog readers probably haven't ever seen it, and it remains the objectively best, most full realized piece of original art in my collection. The previous scan was smaller and digitally crapped upon in a vain effort to improve the reproduction, so I decided to take it to FedEx Office and do the job right. Also, frankly, I was a little peeved to recently learn Bair self-swiped the central figure in 2000 for a commission, although I've inspected a larger scan of the recreation and noted that the details (specifically the crosshatching) aren't exactly the same. I had this art prominently featured on my old Martian Manhunter: The Rock of the JLA WebTV site over a decade ago, so you'll excuse a bit of territorial pissing.

I bought the art off the inker Buzz, who shared embellishing duties with Bair on JSA around this time. I'd love to know the backstory of why it was created. I've always assumed from the 1997 date that it was intended for JLA Secret Files & Origins #1, since either of the peripheral bars could have been covered over with a strip of biographical text. However, it could just as easily have tied into the 1998 unpublished Legends of the DC Universe story arc intended to be put together by Ron Marz and Bryan Hitch, for which Christopher Moeller painted two covers, only one of which saw print as a poster. It's also possible that it had something to do with the Martian Manhunter ongoing series launched that same year.

Holding the piece in my hand, what strikes me the most is how drenched in ink and white-out the thing is. When you turn it around, it looks like an embossed cover, with the black areas receded (and bled through,) while the lighter portions pop out (especially Mars and its moons.) J'Onn's chest traps are shiny and lumpy. The richer black areas seem to be slathered in india ink, which is severely cracking in the central bar below the Manhunter's left arm and legs. Other areas, especially the crosshatching on the left-hand profile, appear to be gray streaks of marker. My favorites are the celestial bodies, the J'Onzz family, and the splatter lighting (toothbrush flecks?) near Detective John Jones. I still love looking at it all, so the framed art hangs directly above my desk for easy viewing.
Posted by Diabolu Frank at 1:13 AM

I like a lot of the effects in this art, particularly J'Onn's facial expressions.