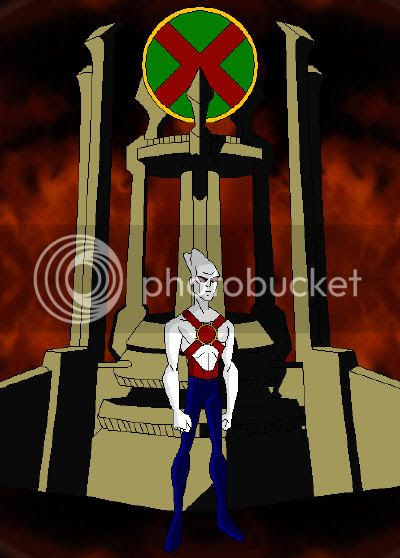 N:TAS DCU: Z'Onn Z'Orr: Martian Boyhunter 4-08-11
At the Super Buddies message board, there's a user under the handle "NightwingTAS" who builds digital figure models off the Bruce Timm DC Animated Series template for further fan fiction adventures of his own devising. Number 4 in the "Z'Onn "Z'Orr" series, here's his take on Till'all...

The youngest of the captative Martians was Till' All, a young White Martian, who had never known of Mars, or the history, he was born just before he was taken and had been conditioned his whole life to believe he was a Green Martian, because of this his basic form usually reverts to the Green Martian form. While he is able to transform into his White Martian form, Till' All prefers to remain a Green Martian. Through his rescue Till' All had bonded with J'onn, something young male Martians do a psychic connection that bonds a father and son. J'onn decided to take in the young man and add him to his real family giving him the name Tyler Jones, and introducing him to the Justice League. Young Till' decided he too wanted to join his father and sister and took on the name the Martian Boyhunter.

Again, I think maybe N:TAS confused Telok'Telar for Mica'kel, since there's no reason for Till'all to form a paternal bond with J'Onn if his actual father is alive and working with Team Manhunter. I also like the White design above much better that his primary Green Martian Boyhunter form, since it lends itself more to the theme of racial harmony. Also, he looked too much like T'omm, which is especially troublesome if he is an Uncle Tom to the Whites. Till'all was my favorite of the Others, so I like where this is going, except for that skeevy name. Was "Chickenhawk from Mars" taken? There's got to be a less pederastic nom de cape related to a junior hunter, like maybe some sort of "Scout?"