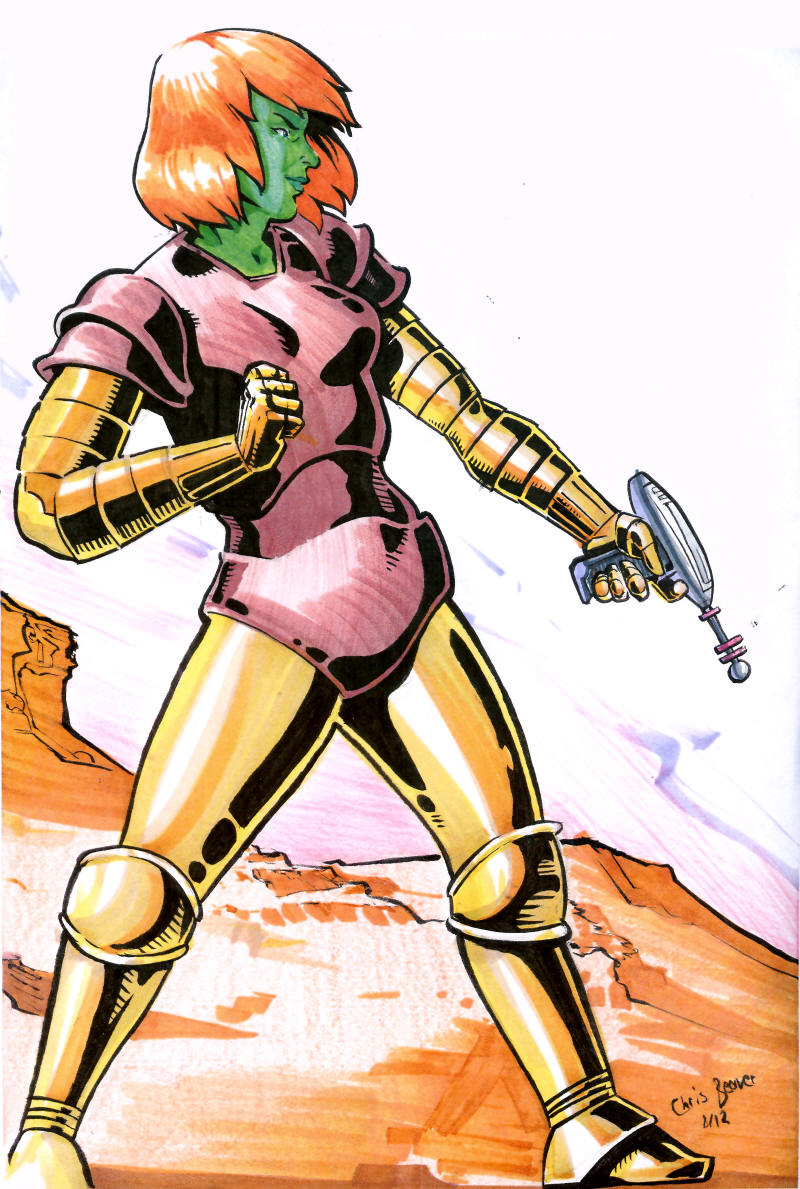 After Comicpalooza, I had a complex posting formula for all the new commissions. The con was in May, but I decided to start posting in June, choosing Wednesday as the sweet spot amidst my various schedules, and running weekly through the September anniversary. The earliest posts were typically initiated because artists had tweeted/blogged about them, so I wanted to catch up. Otherwise, I tended to feature pieces by artists I'd gotten multiple commissions from, so that I could space them out across the months. At one point, September was going to see a massive art dump that would have given short shrift to the artists who were made to wait for their moment on the blog, and it would have been an enormous undertaking to draft a post of this sort every other day anyway, so to heck with that. I tell you this because Chris Beaver drew one of my top two favorites at Comicpalooza, I hadn't run it by the time I bumped into him again at Space City Con, and focusing on supporting characters this month means I haven't run it after or intend to in the foreseeable future. Good thing I got a second Beaver commission featuring a supporting character then, I suppose.

Depending on how one chooses to interpret his somewhat ambiguous relationships with Diane Meade (yes, she's coming) and Bel Juz (her too,) J'en was the only proper girlfriend of J'onn J'onzz introduced before Crisis on Infinite Earths shook the Etch A Sketch on Martian history. Before he had a wife and daughter who were already dead in their first appearance, but not all that long before as a mid-80s creation, J'en was introduced as the homicidal half of an already dead relationship. J'en fell in with a scheming Martian Marshal who staged a coup and sent J'en to kill the "traitorous" J'onzz before he could warn Earth of an imminent invasion. The Hunter Commander failed in her mission, and even when the Marshal was revealed to be a loser puppet of the aforementioned Bel Juz, still ditched J'onzz on Earth to return with her fellow militants back home to Mars II. Aside from the assassination attempts though, J'en was nice enough, and a lot of past sins can be forgiven when someone chooses not to shoot you in the face when you're literally asking for it.

While the character had a modest role in one storyline of Justice League of America ("War of the Worlds, 1984") right before everything went to crap Detroit, I've always had a soft spot for J'en. She came with a ready-made backstory that helped fill gaps in Martian Manhunter's publishing history and love life. She was a heavily armored ballbuster back before it was cool (i.e. 1986's Aliens,) and I dig how someone decided that the perfect compliment for a green skinned proto-Samus Aran was an orange Louise Brooks bob cut. I've done something like four of my goofy "Manhunter from Mars" fanfics that have involved the character, which is probably more than anyone but J'onn himself.*

I really struggled to figure out what I wanted Chris Beaver to draw at Comicpalooza, because one look at his deviantART gallery clearly demonstrates that he can employ a wide variety of styles across a multitude of subjects. It's hard enough to pair just the right artist and character when both are clearly defined, but that much more tricky when you have to factor in fluidity. However, Beaver's more recent pieces involved women that were drawn with realistic proportions and features that reflected the loveliness of actual human beings without the influence of make-up teams, lighting and Photoshop. Beaver could also do armor, as shown through his fascination with the Predators and Aliens. I didn't want a T&A artist doing J'en, and she is a tricky mix of soft flesh and shiny metal, so Beaver seemed like my best bet to find the right balance and respect the character.

J'en was to have been Beaver's "assigned" character at Comicpalooza, but then something else came up, so hitting him up for J'en got pushed back to Space City Con. At least I knew what I wanted in advance of my attending a show I only had a couple days' notice on. Beaver was seated with Vo Nguyen, with whom he's teamed-up with in the past on pieces viewable at CAF. Both also appear to be of the philosophy that $60 should buy you an 11" x 17" full figure in color with a background, which is a mindset I can totally support/exploit. Seriously, I can measure J'en's height in this piece as going from my elbow to my most distal pinkie knuckle. I used to have one of those 1970s Shogun Warriors Godzilla toys that this drawing would still manage to tower over. As has become typical of my attempts to scan full color commissions, loads of subtleties are lost, including an inferred extension of the mountain range in fuscia that reads digitally as some scrapes of purple at J'en's midsection. There's an unexpected maliciousness in her eyes, as if she's just killed someone she really wasn't too fond of (as opposed to targeting a groundhog, which might be how you'd interpret the less clear scan.) I do my best, but these guys end up sold short regardless. It may seem to be damning with faint praise against competition of such magnitude as George Tuska and Alan Kupperberg on a character whose career spanned panels in a trio of JLofA comics, but this has got to be one of the best J'en pictures in existence.

* Well, maybe Despero, but my non-researched mental tally for him is three.
Posted by Diabolu Frank at 1:05 AM