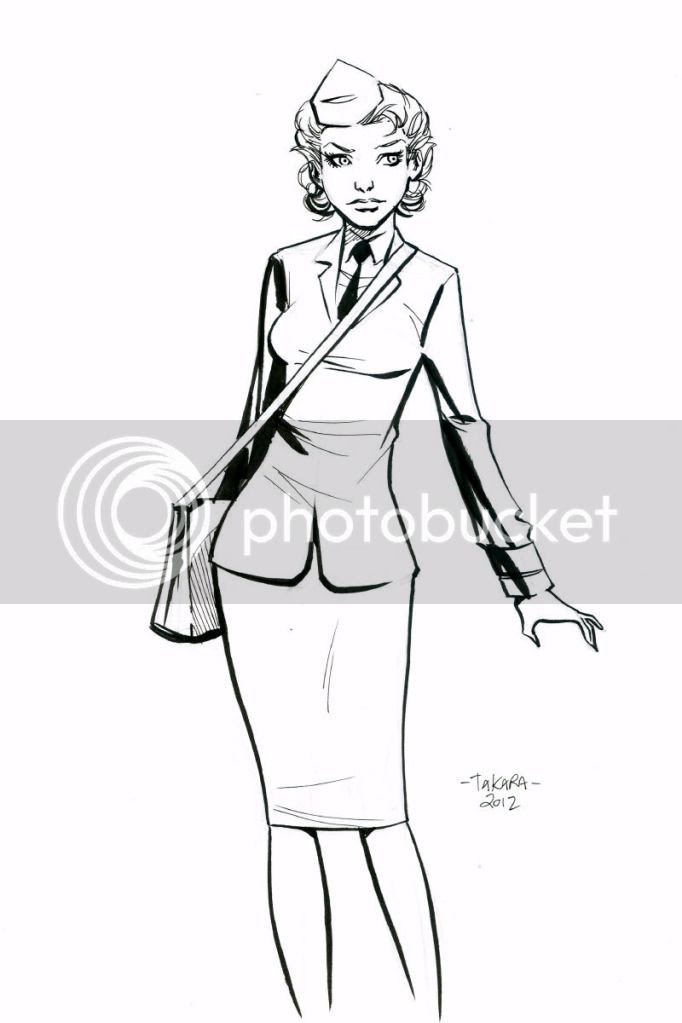 Marcio Takara is an artist the Idol-Head has been fond of since its 2009 spotlight on his piece "The League: Past & Present", not to mention his 100+ Tiny Characters series back when there were still only 50. I would love to get a couple dozen such teensy icons for the sidebar, but I'm not sure how easy that would be to arrange, and at what cost. Besides, Takara has a delicate, graceful line that demands a more fully realized commission. I had a fairly long list of characters that I felt he could do for me at Comicpalooza, but it didn't take long to zero in on just one.

Patrolwoman Diane Meade made a few sporadic appearances in the John Jones, the Manhunter from Mars strip in Detective Comics before graduating to regular supporting character. She was sort of like a less antagonistic Lois Lane, or a cooler Jimmy Olsen. Meade started out as a nuisance who hindered John Jones' ability to use his secret Martian powers, but that evolved into her having adventures of her own without being aware that a Manhunter was quietly assisting her. Eventually, Meade became more self-sufficient, and a genuine aide to the Alien Atlas in his own cases. The arrival of a more capable sidekick in Zook actually motivated Meade to step up in the strip to more screen time. However, when the Detective Jones identity was abandoned by J'onn a year later, Meade and the rest of Middletown were forgotten as the pursuit of the Diabolu Idol-Head demanded all of the Manhunter's time. Meade wouldn't appear again until the late '90s, revised by Mark Waid and Barry Kitson for JLA: Year One and later the Ostrander/Mandrake Martian Manhunter series. 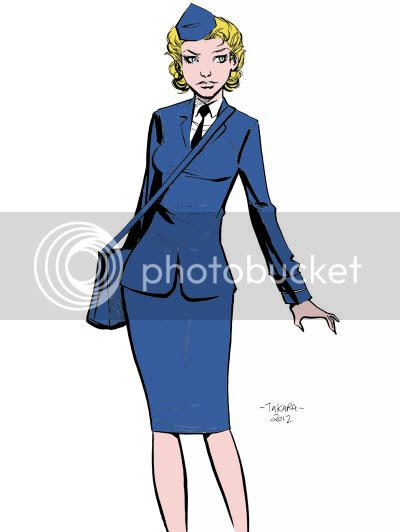 I started a Diane Meade bio for this blog so many years ago, there's an illustration in my Photobucket account taken from a JPEG of an old comic because the second volume of Showcase Presents Martian Manhunter hadn't come out yet. I'm very fond of Meade, but I got away from Silver Age coverage some time back, so she's been neglected. A new Manhunter series without her involvement would be a real shame, since she's one of the only true supporting characters to come out of J'onn J'onzz's longest, original run. Co-creator Joe Certa was mostly a journeyman artist, but you could tell he enjoyed drawing Meade by the care and beauty on display in her rendering. I've wanted a commission of her since I started doing the Comicpalooza rounds, but I have a very specific conception of the character in my mind, and waited for the right artist to execute it. Marcio Takara fit the bill.

I didn't wait long on the con's first day to approach Takara, and there wasn't a lot of drawn out conversation. Takara's a nice guy, but English isn't his first language, so our dialogue was pretty basic. If I recall correctly, he said it's pronounced Mark-e-oh. I tried to see if I could pay him to digitally color a scan after the piece was done, but I think he took it to mean I wanted it done right there with markers, and explained that he didn't color his work. As you can see from his deviantART gallery, Takara is a fantastic colorist, which is ideally suited for Meade's softer tones and piercing blue eyes. I did up one of my usual crumby MS Paint jobs for this post, but I hold out hope to see it done proper by Takara someday. Anyway, the $80 9" x 12" piece was done within a few hours, and turned out crisp like I'd hoped. Takara's star deservedly remains on the rise, but hopefully someday I'll talk him into working on those sidebar figures...

This is a good drawing of Diane Meade, and I wonder if she may make an appearance in the New 52.

My love of inclusive continuity makes me want to keep Diane in the past, but I certainly want to see more stories from that era...

I was getting excited by the prospect of more Silver Age history being reintegrated into the Post-Crisis DCU when the New 52 blew that up. Now, if we must hew to the 5 year timeline, Diane Meade has to be an early and reoccurring supporting player in a Martian Manhunter book.

Nice idea for a comission, Frank. I wish more people knew about the character, one who's always been close to my heart. Nice style to the piece, too, especially the eyes.

I'm getting to the point where I'd rather just leave good characters in the past so I don't have to see DC mangle them in the New 52.